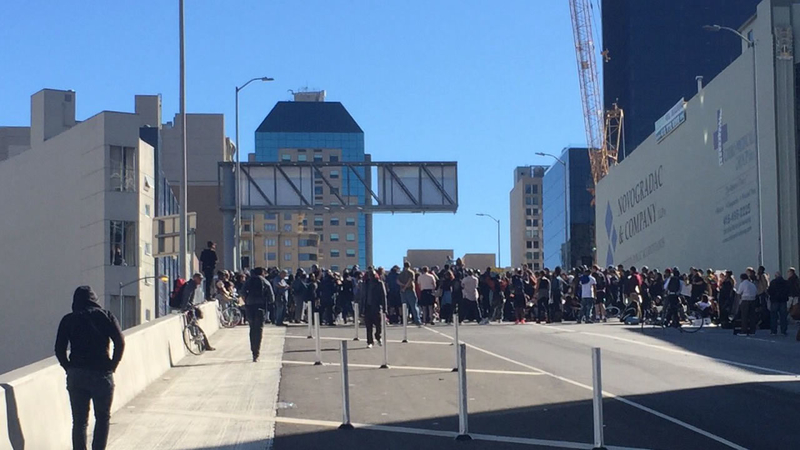 SAN FRANCISCO (KGO) -- Several hundred protesters outraged by the police killings of black men in Louisiana and Minnesota took to the streets of San Francisco, blocking several roads and ramps to get on and off the Bay Bridge.

The California Highway Patrol closed access to the bridge at least two times Saturday afternoon when protesters took over freeway ramps, causing traffic to back up.

The group began marching from the city's Hall of Justice to the downtown shopping area, causing a temporary shutdown of a popular mall as the crowd gathered there to chant slogans and make speeches.

The group supporting Black Lives Matter say they're outraged over recent police shootings of black men in Minnesota and Louisiana.

"Their mindset is not in the right way. Those cops should be out of the force. You can't shoot people because you're nervous," said protester Joseph Latchinson.

Some broadcast the protest on social media. Others came in support of their kids.

"I'm so excited that we got all these young people here they're going to change the world, my generation hasn't," said Tracy Brown-Gallardo.

RELATED: All lanes reopen after protest blocks I-880

"Until we get some unity and some understanding from the people who are sworn to protect us, then we're going to keep fighting every day," Caldwell said.

The protest follows another that was held Friday evening, in which hundreds of people marched from Justin Herman Plaza to City Hall to denounce police brutality in the wake of recent police shootings in Minnesota and Baton Rouge, Louisiana.

San Francisco police say so far there were no arrests and no reports of vandalism.