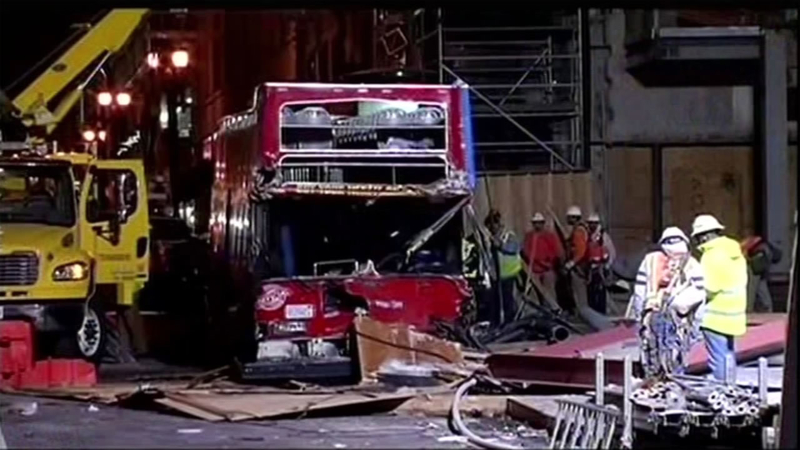 SAN FRANCISCO (KGO) -- More information is being released on the bus company involved in a crash in Union Square. ABC7 News obtained inspection reports from the California High Patrol and learned that City Sightseeing of San Francisco is under increased scrutiny.

At the terminal of City Sightseeing San Francisco Wednesday it was almost business as usual. A mechanic confirmed the company has received a surprise inspection by the California Highway Patrol, which is looking at machines and paperwork.

The Nov. 13 tour bus crash in Union Square prompted the scrutiny. The driver says his brakes failed before the bus careened into a construction scaffold, injuring 20 people. Three of them remain hospitalized.

"Anytime we go in for in for an inspection we always do a random sampling, Hill said.

ABC7 News reviewed CHP reports of 29 bus inspections since April 2013. All of those busses passed with satisfactory ratings, despite minor problems, which included: a loose part on a driver's seat; a cracked windshield; missing instructions for an emergency exit; brakes that pulled or had minor loose or worn parts; and an inoperative clearance lamp.

But the CHP never examined the bus involved in the Union Square accident, and for one simple reason: the tour company never reported it to the California Public Utilities Commission. Put simply, that bus never existed on paper, a violation of state law.

"This company did have satisfactory ratings, but doesn't necessarily mean that every vehicle single vehicle was properly maintained. We can't say that because we can't look at every vehicle. That is the responsibility of the company," Hill added.

In the meantime, the wait is on for the results of that unscheduled inspection.