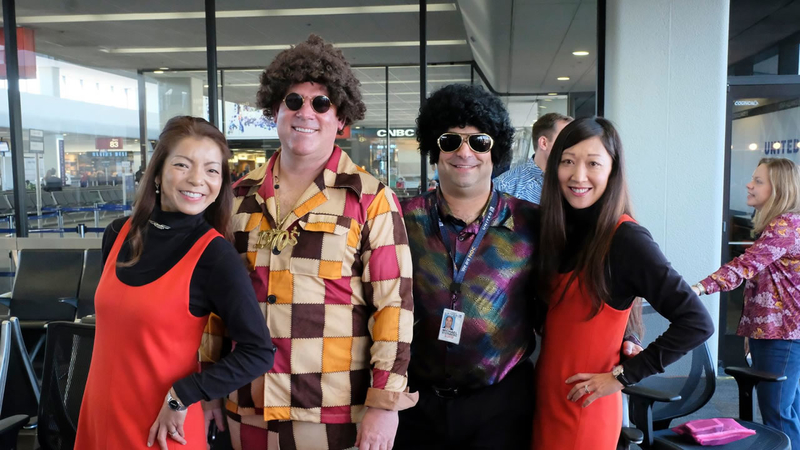 SAN FRANCISCO (KGO) -- United Airlines flew the last flight of its venerable, four-engine 747 jet. Call it a victim of changing times and more efficient aircraft, but the airline sent it out in style.

"Ladies and gentlemen, can I have your attention please?" A voice cooed over the plane's speaker.

You've been there and done this -- crammed and waited to board a giant 747, but chances are you've never seen passengers dressed like this.

One week after Halloween, we've returned to the 1970s as United Airlines both celebrated 47 years of 747 service and ushered it out at the same time.

Normally, a packed flight implies misery. Tuesday, it was back to the past experience as United sent the 747 to Honolulu one last time, much to the delight of aviation geeks who flew in from around the world to experience it.

"For those of us who love the plane, it is like saying goodbye to an old friend," said passenger Seth Miller of New York City.

It's the end of an era for United's Boeing 747. It made its final domestic flight from SF to Honolulu and was sent off in style.

The 747 was, and will always be iconic. THe first wide-bodied jet that flew long distances with hundreds of people. Boeing built more than 1,500 of them.

And as we concluded the plane's journey -- there was a beginning on the upper deck, just past the halfway point to Hawaii, Sean Worsley proposed to his girlfriend Christin Ellis.

Her answer: "Of course."

It was fitting that on the day an era ends, another one was beginning.

Back in 1970, @United takes delivery of its 1st 747. Today, we ride along as the last makes its final domestic flight #abc7now #avgeek pic.twitter.com/vbdLFAvDtV

At SFO, some #avgeek are more excited for the #747's final flight than others. Or, they arrived a bit early? #abc7now pic.twitter.com/OgMd4MYwtV

Welcome to SFO Gate 86 were the only familiar sight is this @United plane. #747 last flight. #avgeek #abc7now It's about top get weird pic.twitter.com/BamxS6N3k3

#UA747Farewell is delayed to to an air conditioning issue. Taking off soon. #avgeek @abc7now pic.twitter.com/EU1rQIB92q

want meals like this every time I fly. From now on. Consider that an order! #UA747Farewell #avgeek #abc7now @united pic.twitter.com/K0UIwSrcRH

After sending my wife the wine list, she wishes she had purchased a ticket. #UA747Farewell #avgeek #abc7now @united pic.twitter.com/CjF8UpQkJj