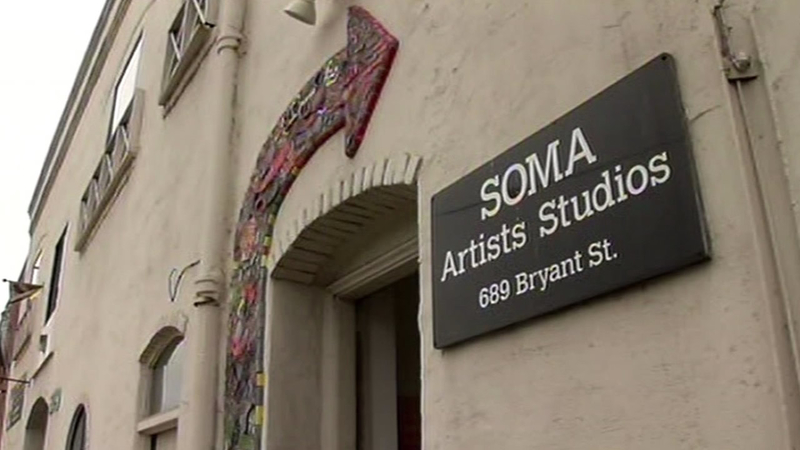 SAN FRANCISCO (KGO) -- At least 43 artists say they're the latest victims of the rent crisis in San Francisco, being "pushed out" of their art studios in San Francisco's South of Market neighborhood. Some of the artists have been there for 26 years.

Flora makes jewelry out of cat hair. She's one of 43 artists now moving out of #SoMa. Watch @ 4pm. @abc7newsBayArea pic.twitter.com/xjAi05lQQL

One artist named Flora Davis called this the end of an era as she learns to pack up 26 years in seven days.

Davis makes jewelry out of cat hair. "Well because I have this cat that has the most super soft hair," Davis said.

Davis rolls her cat, Gaia's, hair into balls and then adds metal or leather.

This is a ball of cat hair, or art. 43 artists say they're pushed out of #SoMa, just 1 week left to leave. #abc7now pic.twitter.com/yhXk7MhZBa

Davis has been in the SoMa Artists Studios since 1989 and now it's the site of a contentious battle.

In October, the Cultural Action Network staged a white out at the studio, with more than 90 works of art draped in white, saying artists are increasingly being pushed out of the city.

The deadline for the artists to be completely moved out is November 30.

ABC7 News tried to reach the property owner named Nader Heydayian for comment, but his office was empty. We called him and were initially told he was there, only to later be told that he wasn't. He did not call us back.

But not all artists are happy with the protest. One of two lease holders said the publicity has backfired. "Now there seems to be just this huge feeling among the big property owners saying 'whatever you do don't rent to artists, they're just going to cause trouble,'" SoMa artist Jane Grover said.