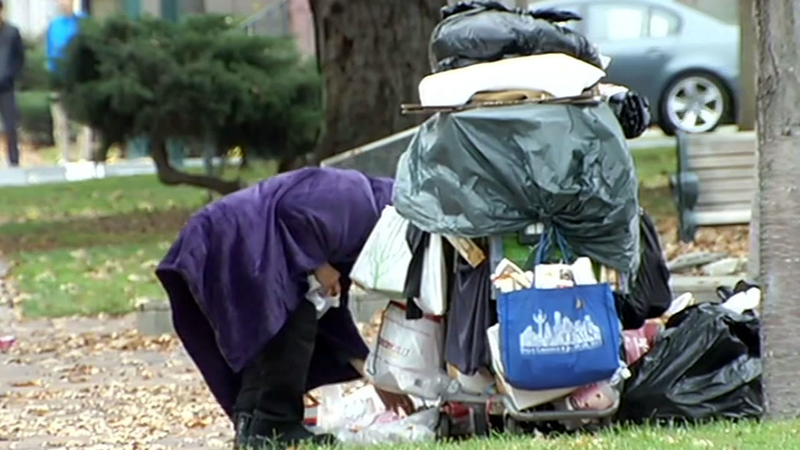 SAN JOSE, Calif. (KGO) -- As the Bay Area prepares for more rain and El Nino this winter, city leaders in San Jose are exploring ways to get more homeless people off the streets.

The San Jose City Council voted to declare an emergency shelter crisis in the city, but some said it's just a short-term solution to a very long-term problem.

In the shadow of San Jose City Hall, tents belonging to the homeless line a well-traveled walk way.

Over at Saint James Park, just a few blocks away a similar scene plays out. "We need to have a place where they can stay safe and warm for the night," homeless advocate Robert Aguirre said.

Aguirre knows the feeling all too well. He said on any given night, more than 4,000 people don't have a home to call their own. "This is an on-going problem, it's just not right now during the cold weather time," he said.

The San Jose City Council unanimously voted to declare an emergency shelter crisis, which will suspend certain standards to allow homeless people to spend the night in public buildings.

Four cold weather shelters will open up at libraries and community centers across the city.

A pilot temporary church shelter program will also be developed. "We're working now with churches that are willing to take in homeless and we're going to waive all the permit requirements in order to make that happen seamlessly," San Jose Mayor Sam Liccardo said.

But some people are still concerned. Anthony King was also homeless at one point said more must be done to ensure that rules and regulations regarding these shelters are properly communicated to the homeless, including what times they will be open and how many items they'll be able to bring with them. "The devil's in the details when you're looking at homeless situations, so we want to make sure those are done and done in an equitable manner," King said.

That topic was also discussed at council, but the proposal could take months to finalize.

In Oakland, the city council will meet Tuesday night on whether to call a shelter crises because of the overwhelming number of homeless people.