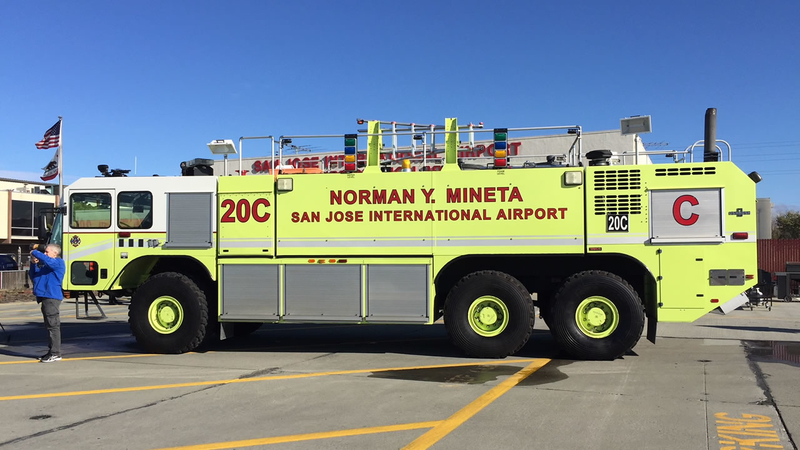 SAN JOSE, Calif. (KGO) -- Seconds count when aircraft are having an emergency. Firefighters at Station 20, based at Mineta San Jose International, have two new aircraft rescue and firefighting rigs to keep pace with the airport's growing roster of airlines, expanding schedule of flights, and larger aircraft on international routes. And they are fast.

We climbed aboard Truck 20A (its new cousin is Truck 20B) and discovered how fast a 31-ton vehicle can move. Once cleared by the airport tower, 23-year veteran fire engineer Al Zamora had us racing down Taxiway Yankee at 72 MPH in mere seconds.

If you've ever looked out the window of a jetliner during takeoff, you know the sensation of rolling down a runway. Only we didn't attain lift, but it sure felt as though we would. A loaded A320 lifts off at 170 MPH, in case you wanted to know.

That kind of speed is critical when jet fuel can ignite, endangering first responders as well as the passengers, flight crew and flight attendants on board. The new rigs have remarkable capacity to deploy what they call "snozzles" that shoot high-pressure water or foam from the front and from an articulating aerial boom. They can also deploy a powder called Purple-K, a fire retardant. Of note is the ability of the rigs to spray water below to protect the equipment and the engineer and the captain inside the cab if flaming jet fuel advances on them.

The boom also has a piercing nozzle that allows the engineer to break the wall of the fuselage to get to an interior fire so water or foam can reach the fire source.

Atop the boom is a thermal imaging camera that allows firefighters to see not only hot spots, but also humans who might be outside the aircraft covered in foam. Capt. Daniel Vega, San Jose Fire public information officer, says smaller thermal imaging cameras have been used to help locate victims of a car crash who might have been ejected into thick vegetation or down a steep hillside.

A federal grant of $1.3 million, secured with the help of Rep. Zoe Lofgren, D-San Jose, helped the airport to buy the new rigs. Additional funding to customize them came from airport funds.