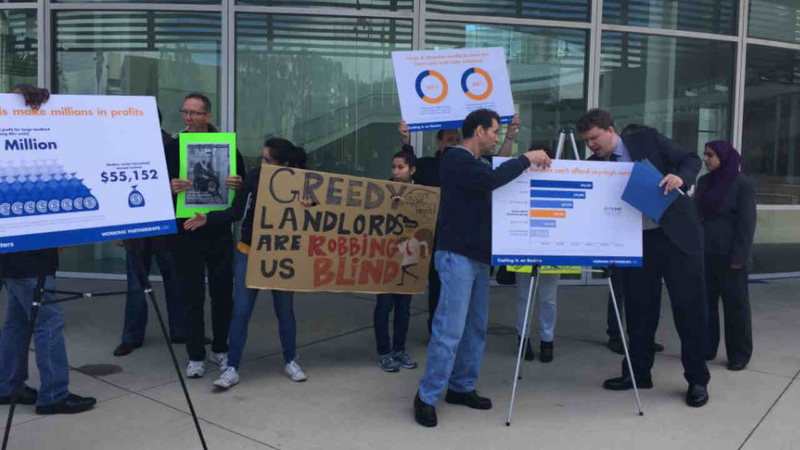 SAN JOSE (KGO) -- A coalition of community, faith and labor groups gathered outside San Jose City Hall during their lunch hour on Wednesday to urge members of the City Council to address an increase in no-cause evictions.

It is permissible in San Jose for landlords to evict tenants without cause. The turnover then allows the rent to be raised.

Once evicted, renters say it can cost over $8,000 to find replacement housing by the time they pay the first month's rent, a security deposit and moving expenses.
A proposed ordinance that will go before the City Council next Tuesday would close that option.

Two groups, Working Partnerships USA and Silicon Valley Rising, say there are 400,000 renters in San Jose. Many are immigrants and low income. According to the U.S. Census Bureau, among families in San Jose making less than $50,000 per year, 29 percent are spending over 30 percent of that income on rent, and 54 percent spend more than half for a place to call home.

"Tenants have reported to us their fear of asking a landlord to repair that (issue) because the landlord can retaliate against them by issuing a no-cause eviction," San Jose City housing Director Jacky Morales-Ferrand said.

But, landlords believe no-cause evictions are a necessary tool to address problem tenants.

"Instead of calling me, and saying 'can you come fix this?' you fill out a form, give it to the housing department, now you're protected for six months, can't ask you to move. Well, that wouldn't be a problem most of the time, but what if that's the guy that's selling drugs?" property owner Michael Fitzgerald said.