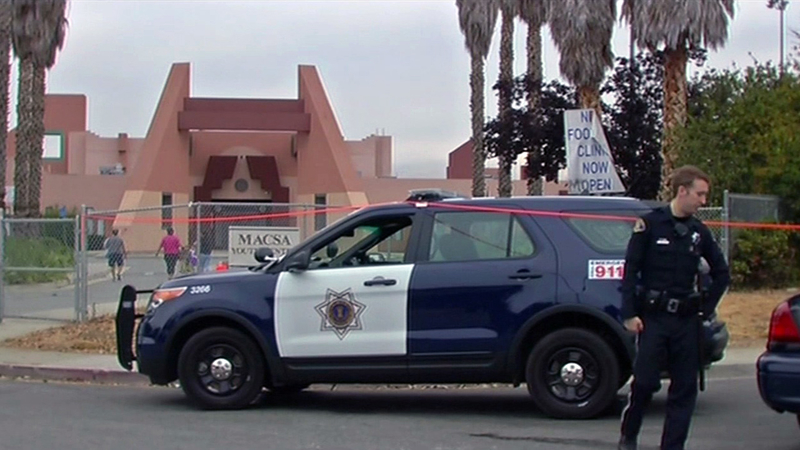 SAN JOSE (KGO) -- Two gunmen are on the loose and families are terrified after a shooting this morning left a man dead close to schools in San Jose. The homicide happened at South Sunset and Lavonne Avenues.

San Jose police are hoping some good leads will come in and help them find two suspected murderers who slipped out of their perimeter. Knowing they are still on the loose is very upsetting to those who live and work in the neighborhood.

"To be honest I am scared and feel like moving my family to somewhere else," said San Jose resident Norman Guerrero.

SJ police are looking for a killer this morning. A 30yo man was shot to death around midnight in Lavonne Ave. pic.twitter.com/MdGYP2FqmU

A man in his 30s was shot and killed on Lavonne Avenue just before midnight. Two young men were seen running away. Police hoped to trap the men inside a heavily watched perimeter. They used dogs and even a helicopter to try and track them - in a neighborhood full of four schools and a youth community center.

"We were able to get a helicopter back out at the end of their shift and use their infrared device to search. So we found it very helpful," said San Jose Police Lt. Chris Monahan.

But by 7 a.m., there was still no sign of the suspects.

"I do believe they're out of the area at this time," said Monahan.

Carmen Guarneros was the first to arrive to open up the Macsa Youth Center, located right next to the crime scene. Police cars and crime tape surrounded the building.

"I'm scared. I don't know what the parents will say. We just opened the center about two months ago," said Monahan.

Some parents took one look at the scene and decided not to leave their kids here today, even though this is a childcare they rely on so they can go to work.

"They're saying the school is open I can drop off but I am going take him home," said Alex Villalobos, mother.

Residents say crime is on the rise.

"This place is getting bad now. I grew up here since I was 13-year-old, it's just bad now," said Guerrero.