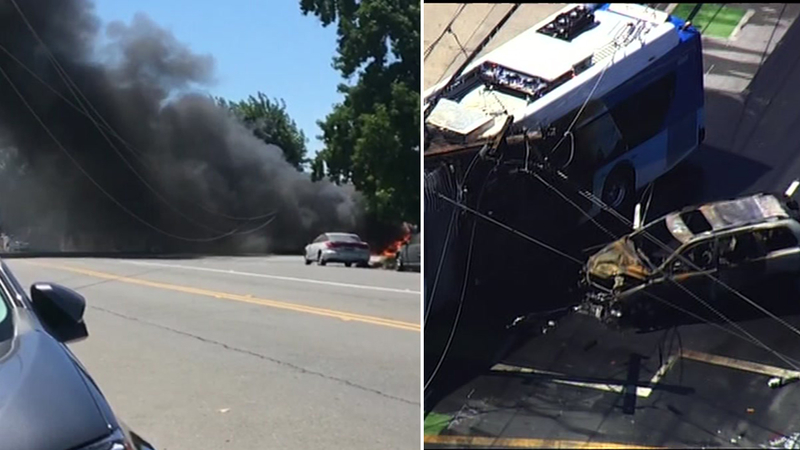 SAN JOSE, Calif. (KGO) -- No one was seriously injured when an SUV collided with a Santa Clara Valley Transportation Authority bus and caught fire in East San Jose on Monday afternoon.

"Early, it was very, very ugly," resident Dora Cano said. "Looked like hell to me."

Cano lives nearby. She arrived only moments after an SUV crashed into the Line 22 bus.

The crash happened right across the street from San Jose Fire Station 16.

Captain Brad Cloutier said those on-duty heard the collision, lost power, and were forced to manually open doors to access the scene.

While the short distance from the fire station made for a quick response, downed power lines added a challenge.

"I saw nothing but black smoke everywhere," Cano described. "I couldn't get too close. Then, when I came over here, I saw a lot of smoke, a lot of fire, a lot of water."

Captain Cloutier said 11 people were on-board the VTA bus, including the driver. He said the driver of the SUV also escaped.

Cloutier said all people involved were treated on-scene and released.

The crash caused more than 5,000 PG&E customers to be without power, at its peak. Traffic detours were also in place to keep drivers from dangerous downed wires.

"Just trying to figure out how to get here was kind of like a struggle," resident Kent Yoeung told ABC7 News. "Having to go all the way around, and I guess I can't even get in still."

Yoeung has lived at King Rd. and Cunningham Ave. his whole life and said he's seen other issues at this intersection.

"I've seen someone get hit by a car crossing the street on this intersection here," he described. "I've seen cars turn the corner and a bunch of hit and runs."

He said while the crash is no surprise, safety continues to be a major concern.