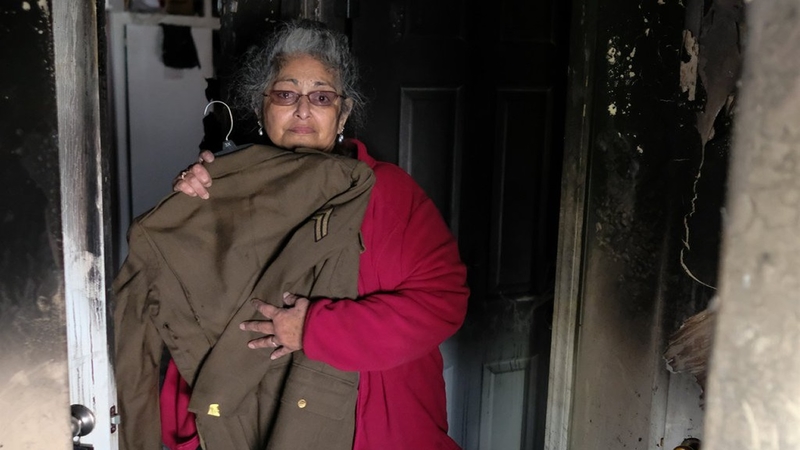 SAN LEANDRO, Calif. (KGO) -- A San Leandro family went through what was left of their burned home. Most items were destroyed, but a few survived and they are the most meaningful ones.

A fire so hot that it spread to the house next door and burned paint off the side of the house and all, according to Kathy Galvan, from a lithium polymer battery charging her grandson's toy car.

She broke into tears. From a tragedy, now a small triumph on this most conflicted Thanksgiving #abc7now pic.twitter.com/XnoGFVS5Xp

"It was almost like the 4th of July, the sparks went boom," said Galvan.

Galvan told ABC7 News the batteries were made by Floureon, ordered online, are now buried beneath a pile of rubble removed from the house.

"In there somewhere on the bottom, it's probably totally disintegrated," said Galvan.

So is pretty much everything else she owns in this now blackened rented home.

"It tunneled down the hall like in the movies, inferno," said Galvan.

Of all the damage, all the lost furniture and clothes, there was one item in particular that concerned Kathy Galvan the most.
"It's my dad," said Galvan.

A last picture of him on the wall; apparently burned beyond redemption. One memory gone; in the hall closet, another, his uniform.

"What can I say, my dad was the best person in the world," said Galvan.

Sergeant Benjamin Galvan served in World War II and died in 1983. As the morning wore on, Kathy Galvan had to know the truth about her other most prized possession. It did not look good, until it did.

"This is the best thing all day! It's my dad," said Galvan.

Tears of grief, turning to joy. Someone to hold, after all, tragedy and now, no small triumph, on the most conflicted of Thanksgivings.

Kathy had to know about the picture.
She willed herself to open the warped and burned frame. #SanLeandro #abc7now pic.twitter.com/Hzayf5MN45

Kathy Galvan put her arms around it as she used to do with her father. #SanLeandro #abc7now pic.twitter.com/EwJHIzgOPL

Most everything she owned is now a pile of ashes and junk in the driveway.
The burned battery, too. #abc7now pic.twitter.com/sxMLlV3yau