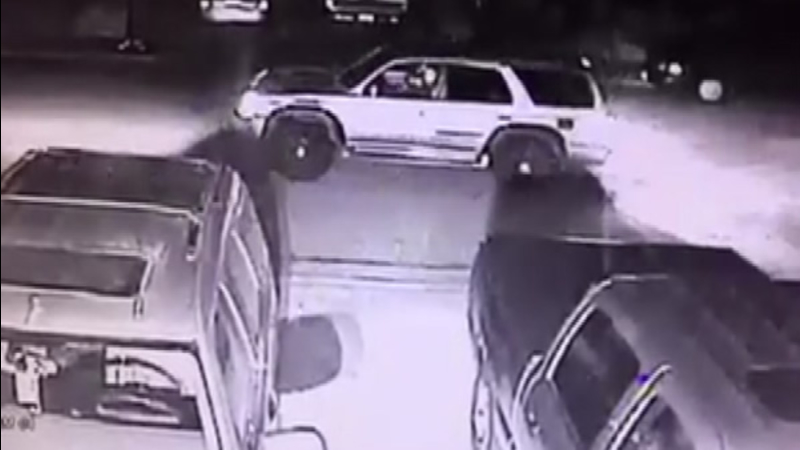 Police say a suspects accused of using BB guns to vandalize vehicles throughout San Leandro and neighboring cities for the past several months are now allegedly shooting at pedestrians.

Police are asking for public's help to identify the suspects and have released images of them and their vehicles.

The most recent incidents happened last week, according to police.

On March 24, around 10 p.m., a silver SUV allegedly drove past a group of workers in the 900 block of Montague Street as they were standing around during their break. Then, the suspects in the SUV allegedly shot at the group. No one was injured in the incident, police said.

Then at about 10:30 p.m., a resident in the 400 block of Begier Avenue said the rear window of his car was shot at. After an inspection, officers determined the window had been struck by a BB.

Afterward around 11:25 p.m., officers responded to a report of an alarm going off at an upholstery shop in the 400 block of E. 14th Street. Upon arrival, officers saw that a front window at the shop had also been struck by a BB, according to police.

At about 8 p.m., a 29-year-old man was standing in front of a bar in the 14500 block of E. 14th Street, when a silver Toyota 4-Runner with black wheels drove past him and repeatedly fired at the man. A BB became lodged in the man's forearm and he was taken to a hospital.

Then around 9:50 p.m., a 49-year-old man was exiting the First United Methodist Church in the 1600 block of Bancroft Avenue, when, what police think was the same Toyota 4-Runner, drove past the man and shot at him, striking him in the head, according to police.

When police arrived, however, the woman had already left and police were unable to locate her.

Since December, the suspects have so far vandalized more than 125 vehicles in San Leandro, Castro Valley and San Lorenzo, by shooting out the vehicles' windows. The shootings have caused as much as $60,000 in damage.

"This is becoming dangerous," police spokesman Lt. Robert McManus said in a statement. "Windows can be replaced. However, these suspects have become violent since they've begun to shoot at people. A BB can cause serious injury. It's crucial that the public help us identify these suspects as soon as possible before someone gets seriously hurt," McManus said.

The suspect vehicle is described as a light-colored SUV, possibly silver, gold or white. In many cases, the vehicle was described as a silver-colored Toyota 4-Runner with black wheels and off-road tires. The 4-runner is either missing its fuel door on the driver's side or it may have an aftermarket door that is black in color, according to police.

In other incidents, surveillance video captured a dark-colored sedan, believed to be a Lexus or Infinity with silver or chrome star-shaped wheels and tinted windows.

Additionally, a white 2000s model Ford Explorer has been used in the shootings, police said.

In an effort to find the suspects, police have increased patrols in the area. No additional incidents involving BB guns being shot have been reported since March 25, according to police.