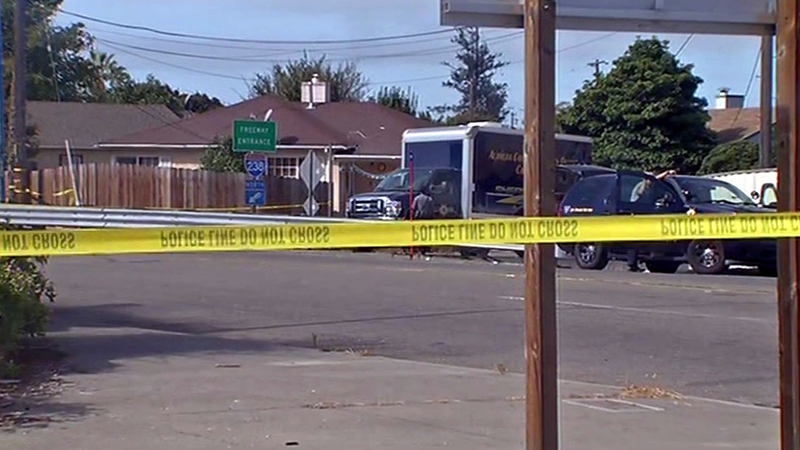 SAN LEANDRO, Calif. (KGO) -- Police in the East Bay are investigating after officers shot a carjacking suspect to death on Tuesday. It happened in San Leandro and shut down parts of Interstate 238 during the morning commute.

The shootout happened in a San Leandro neighborhood around 2:30 a.m. One of the homes on Melody Way is a care home with five elderly men and their caregiver inside.

NB 238 on & off ramps in San Leandro closed while investigators look for evidence - deputies shot & killed a man here pic.twitter.com/NH5iISd7KH

"I was kinda terrified, you know?" said witness Tony Vassallo. "And when I was hearing gunshots I had to duck."

Officers say the man who they shot and killed not only terrorized this neighborhood, but people at two other locations as well.

They say it all started in Oakland around 8:30 p.m. Monday before at a drive-by shooting. One person was shot in the stomach. They got calls of a possible carjacking nearby.

"He does not get the vehicle in that particular case," said Alameda County Sheriff's Sgt. JD Nelson. "But we did get a description of the suspect description which is a black male in a red hoodie."

Minutes later, they got a call of the man walking on Interstate 238.

Officers say he then ran into the neighborhood where the care home is located. Vasallo says his patients were his priority

Investigators say several sheriffs' deputies fired at the man. The suspect was shot and killed.

"Clearly we have a person that didn't care where those bullets were going," Nelson said.

Vasallo added, "We have to be ready for it unfortunately there are people with bad intentions I am glad law enforcement was quick."

Police say the person who was shot in the stomach is expected to survive. And as for the motorist, who Nelson said was hit, was actually not struck. The vehicle was hit, the driver is okay.

UPDATE SIGALERT* NB 238 traffic was held briefly to allow Officers onto the freeway, some delays as you approach the 238/580 interchange.