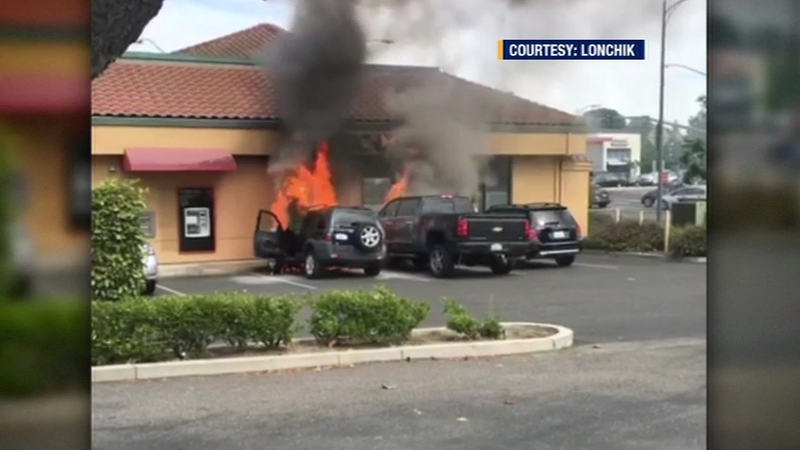 CUPERTINO, Calif. (KGO) -- A Santa Clara man is being called a hero after saving a total stranger from a burning car Saturday at a shopping center parking lot.

The car was on fire and the driver incoherent. In the meantime people were watching and some recorded the incident on their cellphone and only one person jumped in to help.

Aram Harutyunya realized the seriousness of the situation just a few yards ahead of him, while others moved away from the burning car, he never stopped moving towards it.

Then with one swift move, Harutyunya grabbed the man behind the wheel, pulled him out and saved him. "Nobody was pulling him out. I figure we don't pull him out, he's going die so, why not me," Harutyunya said.

There are a lot of reason why not this father and husband.

It was a fire that was growing and spreading. "We just felt the heat, there was a lot of noise coming out of it like hissing, like it was about to explode or something," witness Leo Pekker said.

It turns out the man in the car was drunk. He may have been revving his engine before the fire started. After that, he just wasn't able to get himself out. "He had his eyes open and he was sort of looking around and you could see he was totally lost," Pekker said.

The car owner is charged with suspicion of driving while under the influence, and arson.

But for Harutyunya none of that matters. "I wouldn't leave somebody in a burning car. It's impossible," he said.

Harutyunya also shies away from the term hero, which is what people are calling him.

The sheriff's department is working on getting him a commendation plaque.