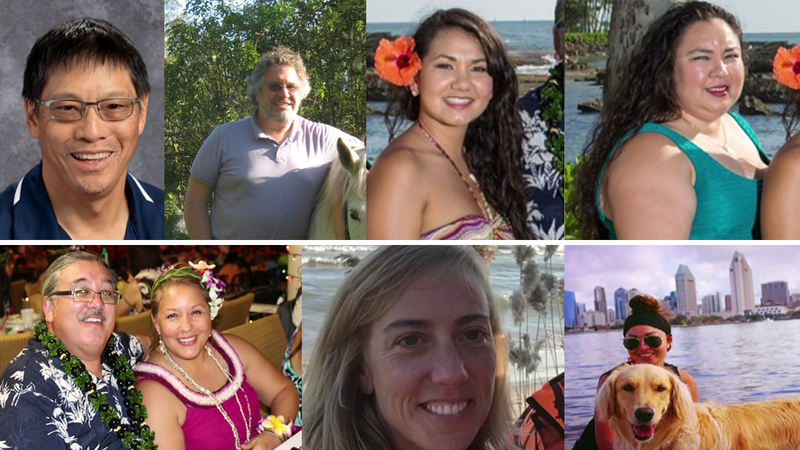 SANTA CRUZ, Calif. -- Several victims of a boat fire that occurred near the Santa Cruz Islands in Southern California have been identified as Northern California residents. From Santa Cruz to Fremont, cities all over the Bay Area are mourning their loss.

FULL LIST: What we know about the victims in deadly blaze off Santa Cruz Island

Here is what we know so far:

On Thursday, Sept. 12, officials announced the names of more victims from the Bay Area. They include:

A Santa Cruz school official confirmed that students were on board the Conception when the scuba diving vessel erupted into flames.

"I expect today is going to be a difficult day," Maria Reitano, Head of School, said. "I think young people in particular have a variety of ways of responding to crisis situations. So we're prepared for whatever they bring to school this morning."

Reitano confirmed to ABC7 News that students and parents from her school were on board the 75-foot Conception. The scuba diving vessel erupted into flames and went down about 20 yards off of Santa Cruz Island.

Steve Salika, his wife Diana Adamic and their daughter, Tia Salika -- who attended Pacific Collegiate School and was celebrating her 17th birthday -- were among those on the boat, family confirms. Another student, Berenice Felipe, was also on the boat with the family.

Administrators have not confirmed if the students were among those killed in the fire.

"Completely engulfed boat. We're not going to make an attempt with our pumps to put it out. Main objective is to look for victims," the mayday call said.

Just spoke with the head of school at Pacific Collegiate School. She confirmed students were onboard the deadly boat fire in Southern California. Grief counselors are at the school today pic.twitter.com/YIkNZtNSj5

Pacific Collegiate has called in crisis support counselors for students. The entire school has around 545 students in grades 7 through 12.

When asked exactly how many students and parents were on board the Conception, Reitano said, "I'm really not at liberty to respond to those kinds of questions until we hear from authorities on what's going on."

Pacific Collegiate School released the following statement on Tuesday:
Pacific Collegiate School is saddened by the tragic sinking of the diving vessel Conception over the weekend. While this was not a school-sponsored trip, our hearts and thoughts are with the families of the victims and those yet missing, particularly those of our students and parents on board. Thank you to the Santa Cruz community and others who have reached out to us to offer condolences and support for our school.

Please contact Santa Barbara County Sherriff's office for news and updates. Our school website will be updated with any further statements from Pacific Collegiate School.

Right now, our priority as a school community is to support our students, staff, and families in the wake of this tragedy. We have been working closely with the Santa Cruz County Office of Education and Santa Cruz County Mental Health Services to activate the School Emergency Response Protocol (SERP) in order to provide much-needed resources and a network of additional support to our school community

Please respect our need to gather as a school community, to respond privately, and to care for our students and families.

Kristy Finstad is a Santa Cruz diver who was leading a group of divers aboard the Conception.

Brett Harmeling, speaking in Houston, said this about his sister Kristy Finstad, the Santa Cruz diver who was leading a group of divers aboard, Conception.

"My sister was one of the most skilled and intuitive, vibrant, loving, compassionate, women that I ever met in my life. She had a skill set that many don't have, survival skill set. And I know that-- what happened-- if there was even a one percent window of opportunity for her to make it out, that she would have somehow made that opportunity a reality."

In an updated post on Facebook, her brother said, "No final word on my sister Kristy; however, it is likely she has transitioned to be with the good Lord."

"She did watershed conservation and was always described as an incredible asset to the team," said Mayor Martine Watkins.

The head of Pacific Collegiate School confirmed that her students were on board Conception.

According to the Fremont Union High School district, a teacher from American High School in Fremont, Raymond Scott Chan and his daughter, Kendra, were also among the victims on the boat.
Sunnyvale's Pacific Scuba Divers is only one of three dive shops in the South Bay. Charles McKinven, the manager of the store knew Chan.

Like everyone Mckinven was shocked. It was, he says, like a freak accident a diver would never imagine happening.

"Most divers are aware of the risks of diving and it all has to do with decompression issues and not holding your breath and things like that." Mckinven added, "Typically it involves a single individual. To hear about 30 plus divers at one time on a boat. I don't think I've ever heard about something like that happening in California or the States."

American High School issued this statement regarding the passing of Chan:
This morning we were saddened to learn of the death of Raymond (Scott) Chan. Mr. Chan and his child, died over the weekend in the tragic boat fire off the coast of Santa Barbara.

Mr. Chan taught AP Physics 1 and AP Physics C at American for the past three years. Mr. Chan was a beloved teacher at AHS among students and colleagues.

His students knew him to be an innovative and inspiring teacher who developed a passion for physics among his students. His loss is a tremendous tragedy for our school district.

Five victims have been confirmed to be from Stockton-- one of which has been identified as Angela Rose Quitasol.

Five victims have been confirmed to be from Stockton-- one of which has been identified as Angela Rose Quitasol.

"She was a cool person. I did not know she was so loved in this school," said Christine Block, who has a granddaughter on campus.

"She was good. She was kind. A good teacher," added Jack.

Quitasol's story is one of five from yesterday morning's fire, and all from the same family. Two of her sisters, Evanmichel Solano Quitasol and NicoleStorm Quitasol, worked locally as nurses.

They perished along with their father, Michel Storm Quitasol, and stepmother, Fernisa Sison. These losses now reverberate through the region.

"You can never imagine it would be this close and hit our community. It is unimaginable," said Christine.

Yet, very real and difficult to process for 11-year-old Nonaya Kelley who remembers Angela Quitasol with such warmth.

"She was fun and cracked funny jokes and at unity day she was dancing with us in the cafeteria."

In a statement, the Lincoln Unified School District said that Angela had worked at the school for four years. Angela had been a student in the district.

Lincoln Unified School District released this statement about Quitasol:
With permission from her family, we are now able to confirm that one of our teachers, Angela Rose Quitasol, was on board the dive boat Conception with several other members of her family.

Angela worked for us for 4 years as a Science teacher at Sierra Middle School. She is a former Lincoln Unified student, having returned to teach in her home district.

For Angela, students were her focus. She shared her passion for science with them and greeted them every day with a high five and a bright smile.

We are all deeply saddened by this terrible incident and hold her family, and all those affected, in our thoughts and prayers at this difficult time.

Nancy Fiedler, the mother of one of the Southern California boat fire victims, said her salvation is believing that her daughter died peacefully in her sleep, after a wonderful day of diving.

Lisa Fiedler, an avid diver from Mill Valley, is also believed to be one of the victims of the boat fire, according to her mother Nancy.

Lisa was on the trip solo.

Colleagues at Apple are remembering two co-workers killed in the fire.

Engineer Steve Salika died along with his wife Diana Adamic, and their daughter Tia.

A Berkeley couple is among the victims of the Southern California boat fire tragedy which has claimed 33 lives.

Daniel Garcia and his partner Yulia Krashennaya were aboard the diving boat Conception over the Labor Day holiday when it caught fire. Friends confirm they did not survive.

Neighbors living on a Berkeley street can't believe the couple who lived in one house won't be coming home.

"I feel like they were part of my family," said Neighbor, Madie Price. "They were very nice people who never gave anyone any problem whatsoever-- they added to the neighborhood."

Friends say Garcia was a software engineer and the primary developer behind lighting technology called FastLED.

The lights in Garcia's yard were the envy of many.

It's tragic end for two neighbors who will be missed.

"I hate that this happened-- they have all my sympathy," Price added.

Carrie McLaughlin and Kristian Takvam were passengers aboard the 75-foot dive-boat, Conception.

Carrie McLaughlin and Kristian Takvam were passengers aboard the 75-foot dive-boat, Conception. The two were co-workers at Brilliant, a San Francisco-based company focused on STEM.

McLaughlin was a Senior Software Engineer. Outside of work, she was an artist.

Takvam was the VP of Engineering.

"The loss of Carrie and Kristian is deeply heartbreaking for all of us at Brilliant. Carrie and Kristian were incredible friends and colleagues who brought immense passion, talent, leadership, and warmth, and they will be missed dearly. Our hearts are with their families and friends."

McLaughlin grew up in Palo Alto and was most recently a resident of Oakland. Neighbors, there are still processing the news.

"Even though I didn't know for sure they were dead, I was already sorry for what happened to them," Owen Lobos said. "It's really a bad tragedy to have this happen. I'm really so sorry for the family. I pray for them and hope they're able to handle it."

McLaughlin's parents still live in Palo Alto. Neighbors told ABC7 News the couple was in Santa Barbara to assist in the identification process.