SANTA CRUZ, Calif. (KGO) -- Steamer Lane, Santa Cruz's famous surf spot, can be tame, but it can also be unpredictable and dangerous.

That's where veteran surfer Brian Hart was Saturday afternoon when he got knocked off his board by south swells and crashed into the cliff.

"From what I heard, he was pitched into the white water, and the white water pushed him into the cliff, unfortunately," said Santa Cruz resident and fellow surfer Kim Stoner. "You have no control at that point."

There were plenty of witnesses.

ABC7 News obtained the audio of the police emergency traffic.

"We're getting numerous calls from the public. We do have the subject out of the water at this time. They do have CPR in progress. 45-year-old male, not conscious, not breathing."

Hart's wife Veronica was on shore when the accident happened.

The Harts' 15 year old son Santiago administered CPR and resuscitated his father. The impact into the cliff left his arms and legs paralyzed, which the family hopes is only temporary.

"I think that he's happy that he's alive and we're by his side at all times," said Veronica Hart, "and we're just trying to be very positive. Brian is an incredibly strong person."

Friends set up a GoFundMe page to help the family. Contributions are closing in on $40,000. Veronica Hart says she's grateful for the kindness of the surfing community, their circle of friends, and strangers from all over.

She is especially grateful for the words of support posted, which give her courage to face what could be a long road ahead.

Hart sustained damage to his cervical spine, and until the swelling subsides, it's not known what surgery will be needed. He remains in serious condition.
Report a correction or typo
Related topics:
santa cruzsurfingman injuredsanta cruz countysportscommunity
Copyright © 2021 KGO-TV. All Rights Reserved.
RELATED 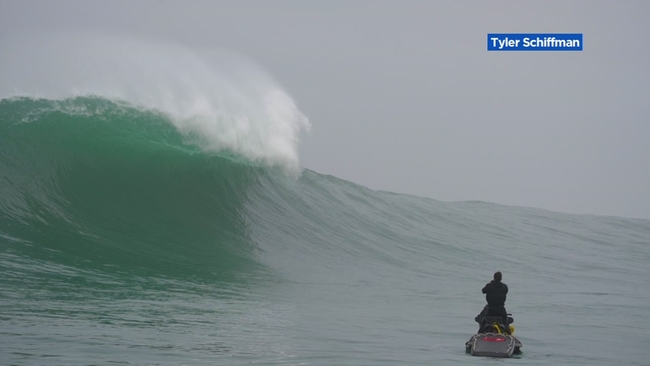 VIDEO: Wave sweeps over surfers in Half Moon Bay ahead of Mavericks
Benefit event for Cal rugby player to be held in El Dorado Hills
More Videos
From CNN Newsource affiliates
TOP STORIES