KGO
SANTA CRUZ MOUNTAINS, Calif. (KGO) -- The second day of the fight against the Bear Fire burning in the Santa Cruz Mountains saw improved weather conditions but also some trouble.

Firefighting aircraft had to be grounded at one point because of a drone flying in the area.

And, the Santa Cruz County Sheriff's Office arrested a Boulder Creek man suspected of looting in the evacuated fire area.

Also, seven firefighters have been hurt battling the Bear Fire. The most recent, an inmate firefighter, was taken to the hospital by ambulance late Wednesday afternoon. The type and extent of his injuries are not known.

But, fire crews have made progress in the fire fight.

A crew from Oregon was focusing on mopping up hot spots at the top of the ridge just before dark on Tuesday.

The crew was initially sent to help with a fire burning in San Diego before being called to the South Bay. A division supervisor said they sent some 50 engines to the North Bay fires. In 25 years, he said he'd never seen such a large response to California.

He and his crew were working near a home that was saved by dozer lines. But nearby, small fires still smoldered in downed trees.

A woman who only just moved to the area two weeks ago said she evacuated around 5am Tuesday, not knowing if she'd have a house to come home to. Her home is still standing. She said she feels incredibly grateful. 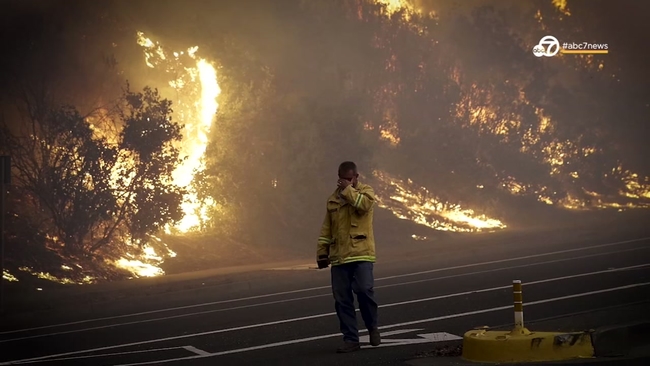