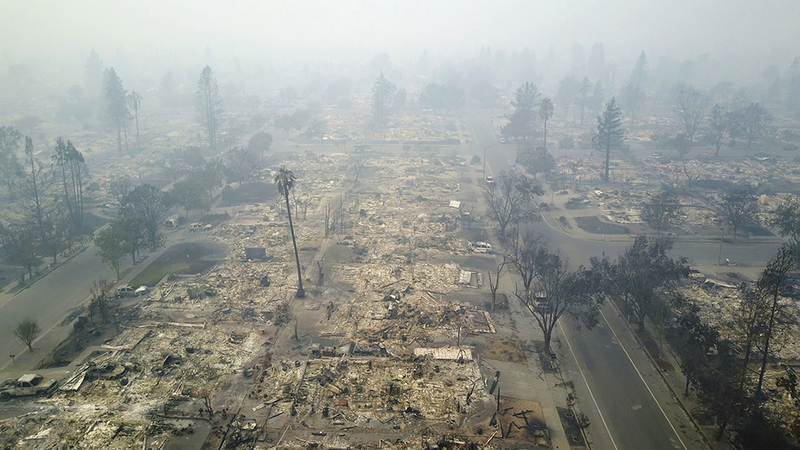 SANTA ROSA, Calif. (KGO) -- As recovery continues in Santa Rosa from the Tubbs Fire that killed 22 people and destroyed thousands of homes nearly two years ago, the North Bay city is working on a plan to prevent a similar fire from happening again, including implementing wood chipping programs to reduce fuel and allowing prescribed burns.

On Monday night, the city of Santa Rosa Fire Department held the first of three public workshops on the development of a community wildfire protection plan.

The hope is that this initiative will help identify and assess the threat of a wildfire in the city's wildland-urban interface areas -- the same areas most affected by fire in Oct. 2017.

"This is a plan that we'll have in place that will help provide the framework for our communities, and are going to hopefully mitigate wildfires in the future," Santa Rosa Assistant Fire Marshal Paul Lowenthal told ABC7 News.

Controlled burns are currently not allowed in the city of Santa Rosa, but Lowenthal said the city may change that.

Here in Santa Rosa for the 1st of three community meetings to make a plan to prevent future fires. One woman tells us she wants the city to make a law requiring homeowners to manage their brush https://t.co/uRpb8zeLSZ pic.twitter.com/EiJ8oa3liQ

Cate Steane, who lives in Santa Rosa and attended the meeting, said she hopes they do.

"I hike every weekend at the Annadel state park and the north side of that park, the part that did not burn, is at a high risk level," Stean said. "It really needs to have some prescribed burn to reduce the fuel level."
Laura Orney, who lost her home in the Tubbs Fire, said she hopes to propose another idea.

"I'd like the city council to pass a law about vegetation management," Orney pitched. "People that own property don't just have to cut the weeds down, they've got to cut everything down that's flammable."

Lowenthal said the city of Santa Rosa has been denied grant money for fire prevention programs. They're hoping this plan will change that.

"All those different priorities will go into us getting grants, and those grants are where we're going to see assistance from FEMA, the federal government, to monetarily fund some of those ideas and concepts," he said.

The next two community workshops are scheduled for July 25 and Aug. 14 at the Finley Community Center in Santa Rosa.

The city is also asking anyone who lives in the area to fill out this survey about fire prevention.