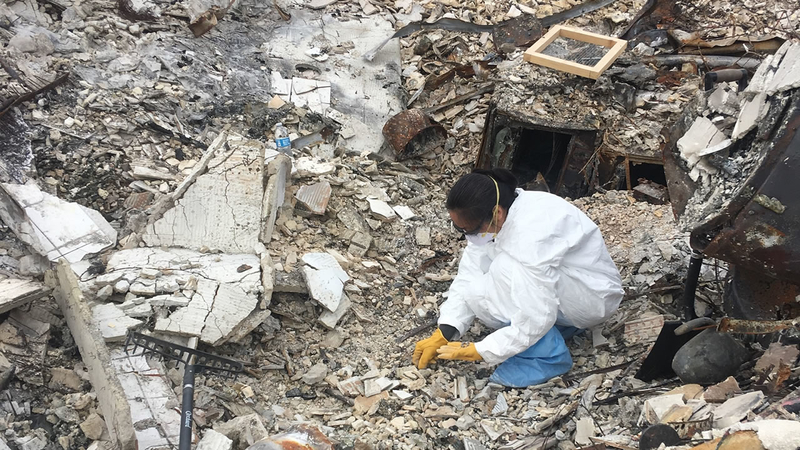 SANTA ROSA, Calif. (KGO) -- What is it they say about lightning? Doesn't strike twice? Well fires do. Just ask Dr. Antonio Wong and his wife Pratima.

Like thousands of others, they and their 19-year-old son had to evacuate in a hurry, basically run for their lives, from their Fountain Grove neighborhood two months ago.

"I looked across the street and there was like a 20 foot tall tree that was lit up like a torch. So then I realized oh, this is really bad," said Antonio.

Their house on Rocky Point Way was one of hundreds to burn to the ground. They couldn't even get up the road to see it for two weeks.

"It's hard to see the front view where you just see the stairs going up to nothing," said Antonio.

That was bad enough, but then, it happened again.

The Wong's only purchased the house in Santa Rosa six months ago after moving from Southern California a year and a half ago. They left their house in Ventura behind, deciding to rent it rather than sell it, thinking maybe they'd return to it someday as a retirement home.

On Tuesday, that house in Ventura burned to the ground in the massive Thomas Fire.

The Wongs saw video of it engulfed in flames on the website of a Southern California TV station.

"It was surreal, more like numb you know. Did this really happen to us?" said Pratima, through her tears. "For the second time, it's a lot harder."

To make matters worse, the Wong's learned their insurance agent gave them some bad advice and they were under-insured in both places.

After meeting with other families who lost homes in Santa Rosa, they learned many of them also did not have enough coverage and it was perhaps a much larger problem in the insurance industry.

"That's the first thing I thought of when the Ventura fire happened, 'Oh my God, I haven't increased my insurance down there,'" explained Antonio.

While the Wong's figure out whether they can afford to rebuild either house, they also have to decide if they want to. "The road to recovery is long," said Pratima. "It might be hard, but we'll get there."

While some have offered the Wong's financial help, they are asking for people to make donations to www.cafirefoundation.org which provides assistance to firefighters and their families, as well as fire victims throughout the state.

Click here for more stories, photos and video on the Thomas fire.