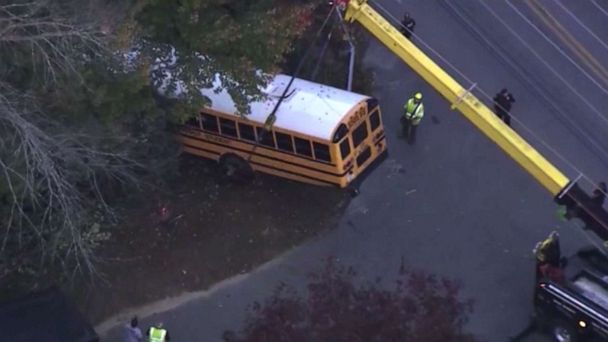 A driver experiencing a medical emergency crashed a school bus carrying six children into the woods in New Hampshire Tuesday, according to the Plaistow Police Department.

The accident took place at 3:43 p.m. local time. None of the children were hospitalized and the driver, who was taken to the hospital, was stable Tuesday evening, police said.


Two mothers -- Stephanie Geary and Gina Lynch -- were present at the scene of the crash and were able to help the children off the bus.

In an interview on Wednesday, Geary told ABC News that she and Lynch were driving toward Timberlane Regional School when she noticed the bus coming in the opposite direction in her lane.

"I noticed something right away was off because I'm like why would a bus be in my lane coming at me very fast," Geary said.

Geary swerved her car to the left, allowing the bas to pass on her right, before it hit a guardrail and crashed down an embankment. Geary and Lynch rushed to the scene to help the children.


Geary and Lynch pried open the back door of the bus in order to evacuate the children, according to Boston ABC affiliate WCVB.

"We were scared. We didn't know what we were going to see. All we heard were screaming kids and my heart went into my throat," Lynch said.

The area surrounding the crash site was closed off by the police for approximately an hour.