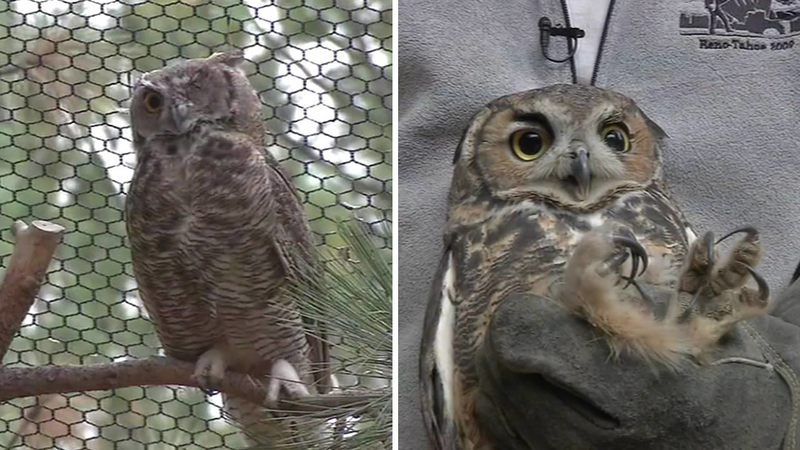 The Lake Tahoe Wildlife Care center released two lucky great horned owls into the wild. (KGO) -- Two very lucky owls are back in the wild thanks to volunteers and animal experts who gave a hoot. ABC7 News got to go along as the two spectacular birds got a second chance at life.

Great horned owls are critical to the environment. They are apex predators at the top of the food chain, but sometimes even owls need help and that's where a non-profit group called Lake Tahoe Wildlife Rescue comes in. It is run by Cheryl and Tom Millham.

The rescue center has been caring for two great horned owls for the past several months. One was just a tiny chick when it was found in April at the base of a tree where it had fallen out of its nest. Bird lover Rob Lowry watched it for several days and determined the parents could not take care of it. Lowry called the rescue center and was told to bring in the chick for help. It was only a couple of weeks old, still very fluffy, and so young it had not opened its eyes.

The second owl was a little older and arrived several months later. It was so badly injured it had to have one of its eyes removed.

Both owls have been living at Lake Tahoe Wildlife Care in a big cage where they can practice for life in the wild. Both have shown they can fly and hunt on their own, so they are ready for release.

The Millhams have a carefully choreographed routine to catch the owls with a big net. It takes only a few seconds. The owls are not harmed, but they are mad. The screeching is deafening as each bird is carefully placed in a cardboard box.

The Millhams are confident the one eyed owl will be fine. According to Cheryl, "It's OK to release a one eyed owl because they focus their eyes independently of each other, and they hunt mainly with their ears." Great horned owls have very large ears under pointy feather tufts that look like horns.

The owls are driven to a safe place for the release. Volunteers come along to watch and help with the big moment.

The one eyed owl shoots out as soon as its box is open and flies elegantly to a grove of trees. But the younger owl is more tentative. It lands in a field and runs around in the dry grass, still trying to decide how to handle the big outdoors.

Owl rescuer Rob Lowry is one of those on hand to watch. He says he is grateful for the volunteers and expert care that led to this moment. "There are so many interactions now between humans and different animals that one way or another (the animals) get hurt. It's good there are places out there that animals can have that second chance."

Soon after the release, Lowry saw both owls sitting comfortably in tall trees. By the next day they had headed off to start their new lives.

Lake Tahoe Wildlife Care has helped more than 24,000 animals over the last 37 years. The non-profit is working to move to a larger facility so volunteers can care for even more animals. They can use donations and volunteers.