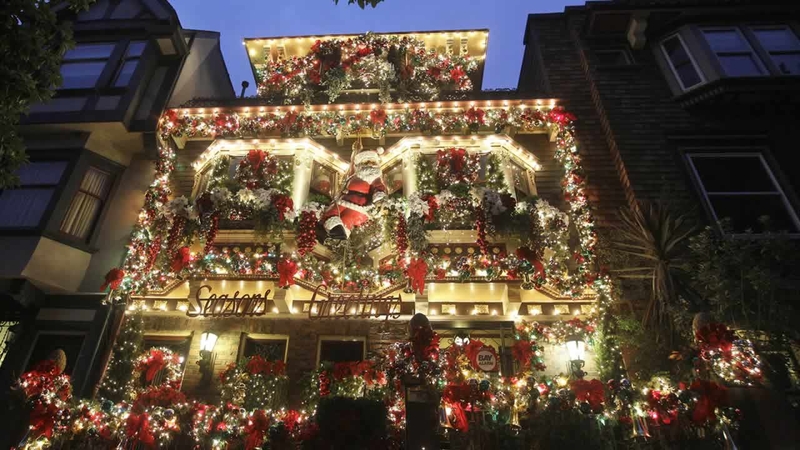 SAN FRANCISCO (KGO) -- If you've ever joked that your neighbor's Christmas lights are bright enough to be seen from space, it turns out you're right! On Tuesday, NASA took the stage in San Francisco to show what it's learned by watching those twinkling lights from miles above the earth.

At Cole Hardware, the Christmas lights are flying off the shelves.

"We sell out of a lot of the basic lights almost on a daily basis," said one employee.

And then there are the super deluxe ones.

Would it surprise you to know that NASA can see the lights from space?

It was just up the street at the Moscone Center, where NASA presented the findings to the American Geophysical Union. The images were taken with a satellite that orbits the earth from North Pole to south.

And on it is a camera that can see through clouds. Every night at the same time, it circles the globe and takes pictures.

"This is a huge effort, it took three years' worth of data," Roman said.

And it all boiled down to some nifty observations.

While in the Middle East you can see which cities observe Ramadan by who keeps the lights on late, researchers found that the United States glows brighter at Christmastime no matter where you are.

"What we're seeing is that Christmas is not just a religious holiday, it's also a civil holiday," said Roman.

NASA looked at cities all over the U.S., but they found something different here in the Bay Area. While you typically associate big lighting displays with big suburban homes, here some of the brightest lights are right in the packed city of San Francisco.

NASA releases image of what holiday lights look like over the Bay Area.

Researchers say the city's unique architecture lends itself to Christmas lights. On a difference map, all the parts colored in green are spots that were brighter in December than the rest of the year.

In other cities like Los Angeles, the green is thickest in the suburbs. But speaking of green.

NASA's next satellite could tell the difference between LED and traditional lights. In fact, the whole point is to see how events like Christmas have an effect on the way we use energy or conserve it.

"So that we can also detect the greening of our nation," Roman said.