KGO
MOUNTAIN VIEW, Calif. (KGO) -- There are eight planets in our solar system that we have explored close up and one recently demoted planet we have not - Pluto. A week from now that will change.

ABC7 News took a look at a spacecraft now barreling toward Pluto and what scientists hope to learn from it.

The 2006 launch of the spacecraft New Horizons was the start of a long journey.

"It's the fastest spacecraft that we've ever launched from Earth, and even so, it has taken 9.5 years to cross the three billion miles from Earth to Pluto," NASA research scientist Dale Cruikshank, Ph.D.

Long known as the ninth planet, recently demoted to a dwarf planet, artists have imagined what Pluto might look like, but now, New Horizons is sending back its first real images, including dark spots no telescope has seen before.

"We don't know what that dark stuff is. We just don't know. I think we will find out," Cruikshank said.

Still, Cruikshank might be a little nervous. The spacecraft's computer briefly froze up over the weekend. Engineers scrambled to restart it, before that critical moment on July 14th.

"Pluto really isn't very large. So you're coming onto it at 30,000 mph, suddenly, you're there and then it's over," Cruikshank explained.

However, in that brief blink of an eye, Cruikshank will learn volumes about something he has been trying to replicate in a lab for years -- the complex organic dust mixed in with the ice on Pluto's surface.

"Ices that you make in the laboratory are colorless or white, yet Pluto has color. Pluto is some mix of yellow and brown and reddishness. So what is that stuff?" Cruikshank questions.

Recreating Pluto's cold temperature and atmosphere, he's made tiny vials of what might be Pluto dust. New Horizons' infrared cameras could tell him if he was right or wrong.

"Every time we have flown past a planet or its moons or a comet or an asteroid, we've been astonished," Cruikshank said.

That was true when New Horizons flew past Jupiter and found Earthlike storms in its atmosphere.

On his trip to Mission Control, Cruikshank is bringing book that was signed by Clyde Tombaugh, who discovered Pluto in 1930. He is hoping the explorers of Pluto will sign it too. 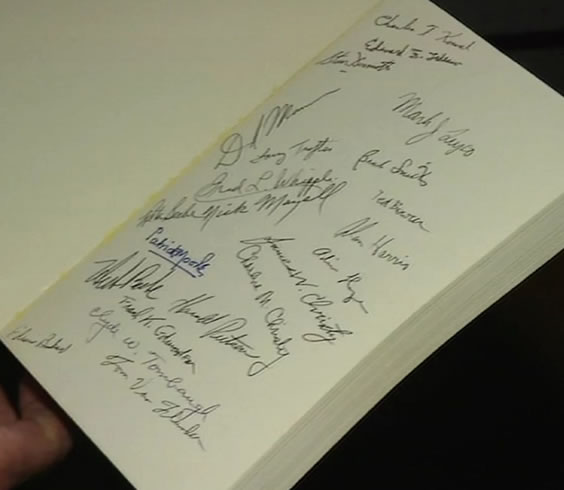