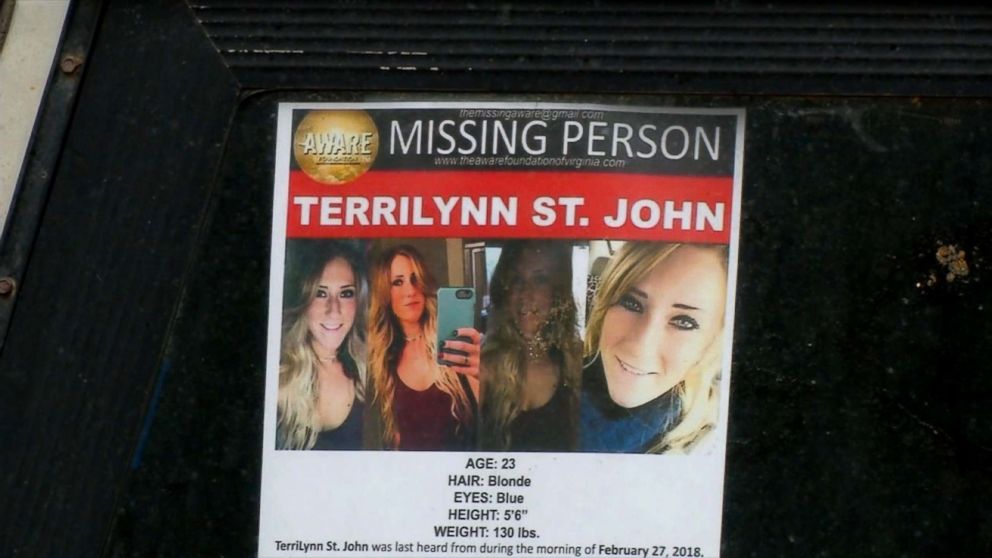 ABCNews
By BILL HUTCHINSON
A desperate search was on today for a Virginia mother who mysteriously vanished on Tuesday when she walked out into her front yard, leaving two young children she planned to take to daycare inside her house, authorities said.

TerriLynn St. John, 23, was reported missing Tuesday morning when she didn't show up for work, according to officials. She was last heard from about 7:30 a.m., according Maj. Michael Samson of the Middlesex County Sheriff's Office.

St. John's father went to the house in Wake, Virginia, after learning from his daughter's coworkers that she never made it to work, Samson said at a news conference today.

St. John, who recently moved to Wake, had planned to drop her children off at daycare before heading to work, Samson said.

Her car found was parked in the driveway.

"This is a missing person, under suspicious circumstances," Samson said, adding that it was too early in the investigation to call the case an abduction.

Deputies searched the property and found St. John's cell phone in bushes outside the house and a broken necklace was discovered in the yard of the home, officials told ABC station WRIC in Richmond, Virginia.

Samson said investigators have interviewed several persons of interest, adding that each cooperated and submitted DNA samples that are being analyzed in a crime lab. He declined to identified them.

The sheriff's office launched a search of the area within two hours of St. John's disappearance being reported, using air surveillance and search dogs.

St. Johns's children were placed in the custody of her father, Samson said.

The missing woman is described as 5-feet-6-inches tall, about 130 pounds and has blonde hair and blue eyes. She has the letters "R.J.M." tattooed on her right wrist, a princess crown on her left wrist, and a cross on her ring finger.
Report a correction or typo
Related topics:
abc newsnational
Copyright © 2020 ABC News Internet Ventures.
More Videos
From CNN Newsource affiliates
TOP STORIES