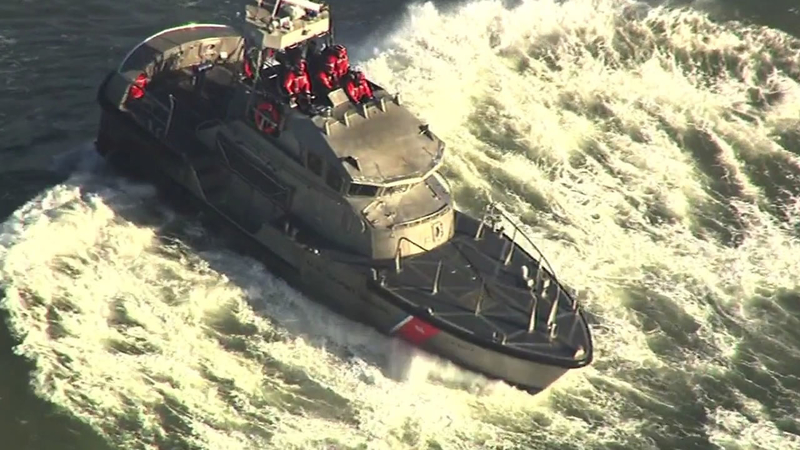 HALF MOON BAY, Calif. (KGO) -- A man was swept out to sea and the U.S. Coast Guard conducted a search for hours Monday afternoon and evening. The missing man was last seen in the water around 2 p.m. at Dunes Beach in Half Moon Bay, just off Young Avenue.

Authorities know that the man didn't drive to the beach as all the cars were accounted for. To find out who he is they hope someone will report him missing.

Boats and rescue swimmers were in the water looking for a man last seen struggling in the ocean.

Surfer Christopher Benoit was in the water during the search. He says conditions were rough. He told ABC7 News, "So it just keeps pushing you back in and it sucks you right back out. You get stuck right in the middle, in between where the waves are breaking and where all the white wash is, so maybe he got rolled around a couple times."

At least two or three people called for help from the beach after seeing a man go into the water around 2 p.m. One person tried to save him, but got knocked down and couldn't pull him out.

"You should not be going in the ocean if you're not an avid ocean-going swimmer or surfer," California State Parks lifeguard Jeff Wadkins said.

State parks life guards were on scene within 10 minutes.

"We had about an hour of in-water dive searches, conditions were rough and not permitting a very effective search," Wadkins said.

The helicopter continued to fly for about four hours.

Photographer Greg Edwards is a regular at the beach and was not surprised at what happened. He said, "There has been a lot of people who have died because they didn't think it was that dangerous, but you can get killed."

The Coast Guard has not determined when or if it will resume its search.