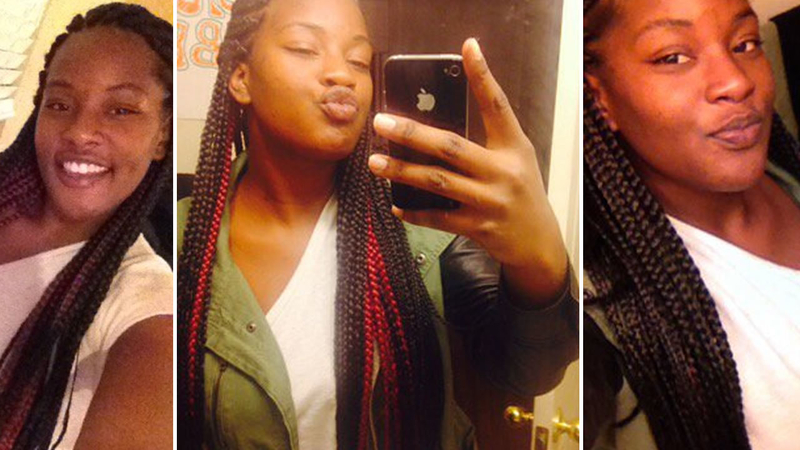 EL CERRITO, Calif. (KGO) -- Police in El Cerrito are asking for the public's help to catch a woman they say is a violent suspect who may get caught because of her own mistake. And the case may be cracked by a selfie.

According to authorities, the smiling woman in the selfies is actually a violent thief who beat up a teenage girl to steal the phone that took these pictures.

A young El Cerrito High School student was walking to class talking on her iPhone when a car rolled up and a woman jumped out and demanded her phone and backpack and then started punching the girl.

"She hit the juvenile in the head several times causing some minor injuries to her facial area," said Sgt. Ian Wong. And actually caused her to lose consciousness and go to the ground."

I wonder if she's still smiling now that @ElCerritoPD has put her picture out there? pic.twitter.com/tJS6E8ZXab

Several days later, while recovering from her injuries, the young victim found the selfies on her iCloud account and recognized the woman as her attacker.

"I don't think she knew it was being uploaded to the cloud. I think they were assuming it was on the factory default settings," Wong said.

Students say nearly everyone has a smartphone, but some protect them better than others.

While one student said she probably wouldn't do anything different, student Devin Emelo said, "Don't like be showing and trying to be flashy with your phone and stuff like that. Stop showing people you have nice stuff, because people might be wanting the stuff that you have."

As for the woman who snapped those incriminating selfies, another student said, "That's kinda dumb to take pictures of yourself."

.@ElCerritoPD getting many tips about woman. Think suspect uploaded selfies from stolen phone to iCloud by mistake. pic.twitter.com/S2p8AxX2iR

.@ElCerritoPD Cops don't think this suspect knew her selfies would transfer to ICloud from phone stolen from teen. pic.twitter.com/BwgIOmdfgN