KGO
By by Mealnie Woodrow 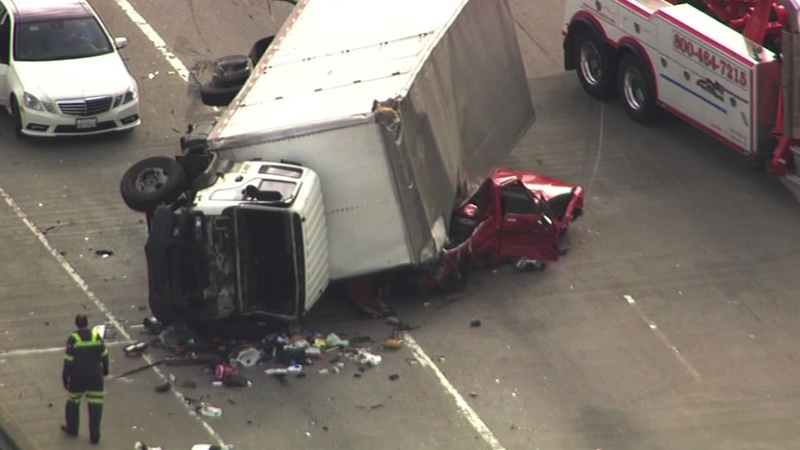 OAKLAND, Calif. (KGO) -- Twelve vehicles tangled on a busy approach to the Bay Bridge Friday morning and amazingly everyone walked away.

Only two people were hurt, both with minor injuries. The vehicle that was most impacted was a red pickup truck that was pinned under a white truck. The driver told ABC7 News Friday evening he was out of the hospital.

The way drivers viewed the 12-car crash depended on where they viewed it. Outsiders called it an inconvenience, but those in it called it a miracle.

According to Officer Eric Anderson, one person was trapped in the collision that involved a truck on top of another vehicle and two box trucks.

The CHP reports that all lanes of the connector opened at 11:30 a.m. Anderson notes that the first report of the collision came in at 9:35 a.m. and a traffic alert was issued at 9:53 a.m.

Mark Fisk, a driver who witnessed the crash, says he was driving no more than five miles an hour following an earlier Bay Bridge backup when he "heard a terrible sound, looked up and saw cars spinning... flying in."

"I had planned on bringing my 3-year-old daughter to work today. She had a pajama party for her preschool. And thank God, thank God I didn't bring her in," Fisk said.

He estimates this driver of a white truck was going 75 to 80 miles an hour. "It just took a line of cars out like nothing I've ever seen," Fisk said. The white truck landed on the red pickup. Drivers were amazed no one was seriously injured.

One woman says she skipped public transportation so she could give her coworkers bottle of wine for the holidays. The bottles did a lot better than her windshield. "I have it in my trunk it didn't break," she said.

She gave a bottle of wine to another accident victim. Many people's nerves were shattered.

"People don't know how to drive. Traffic is already bad enough. Everyone is in a hurry to get across the Bay Bridge," Fisk said.

Holiday shopping was cut short for some. "Trying to finish the Christmas shopping today and unfortunately that's not going to happen," one driver said.

For those who survived the accident, the holiday was made much sweeter.

Victims say cars were airborne. Many people shaking saying they feel lucky to be alive.

This is the vehicle the white truck fell on. They keys are still in the ignition. pic.twitter.com/RNi7lTkbs9

Tow trucks have uprighted a box truck involved in a 12 car accident on NB 880 to WB 80. 2 minor injuries. pic.twitter.com/fxgdKbunQG