Resident fed up with San Francisco crime after home ransacked, littered with drugs 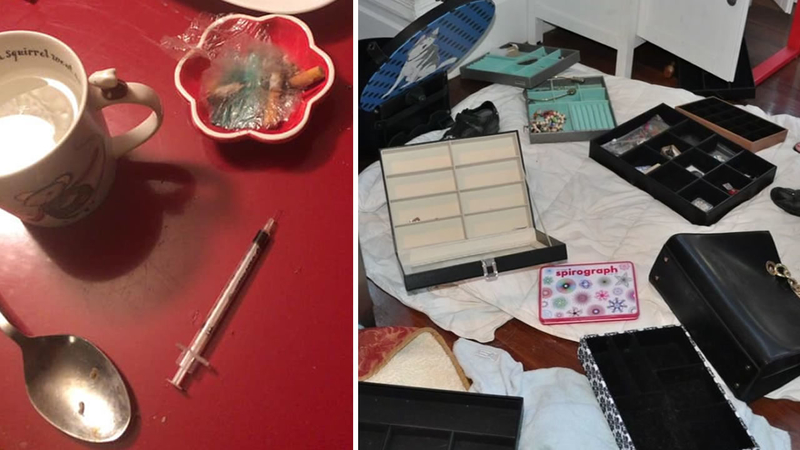 Resident fed up with SF crime after home ransacked, littered with drugs

SAN FRANCISCO (KGO) -- Can you imagine coming home to your house ransacked and heroin and needles on your dining room table? A San Francisco woman it happened to her earlier this month. And now, after nearly 30 years in the city, she's moving out.

Angela Padilla has called a historic house in the Castro home for the last 12 years.

But her feelings changed July 2 when she came home to find her home burglarized. Jewelry, clothing and family heirlooms were missing. She says the burglars broke in, sat down for a meal at her table with her dishes and also left heroin, a spoon and a hypodermic needle on her dining room table.

Now she is terrified for her and her children to even be at the house.

"It was just a shock," she said. "I mean a total shock, it just shows you how crazy things have gotten."

Padilla tells ABC7 her car has been broken into several times in the last year, but this is the last straw.

"It was so creepy," she says. "I mean, used hypodermic needles? Actual heroin on my table. No, that is not acceptable. It's just not. I have three young kids, it's not acceptable."

That's why after living in the city for nearly three decades she says, "I'm done. I really I think I am done with San Francisco."

She added, "The city has become too chaotic, it's a cesspool, there seems to be no hope in sight."

In the meantime, Padilla says she got the biggest, most powerful security system she could.

"I'm getting it all installed," she said. "It has cameras inside, outside motion detectors, lights, everything. We've had a security guy coming at night but you know leaving might be the only option."

Padilla says she doesn't want to live like she's in Fort Knox.

"My 12-year-old daughter is scared to go to the ice cream store one block away because of having to walk past so many folks who are shooting up in broad daylight who are peeing and pooping in public," Padilla said. "I mean, it's just disgusting. They are harassing. They are scary and she can't walk one block to the ice cream shop. That's not right."

"It's like the night of the living dead out here," Fernandez said. "People leave Mission Dolores Park and they work here on the sidewalks and they shake the doors and they were looking in my car. Four or five people looked in my car as I was sitting in the car waiting there."

He says keeping watch is just a Band-Aid.

"I mean, should you have to hire 24 hour security for your home?" Fernandez asked. "Physically hire security, have them stand guard outside because that's the only way to protect your property here in San Francisco at least in this area."

Still, Padilla is optimistic things can turn around.

"I think that we want to keep all the diversity that's here," she said. "We want to improve it but we need to have some better law and order. We do."