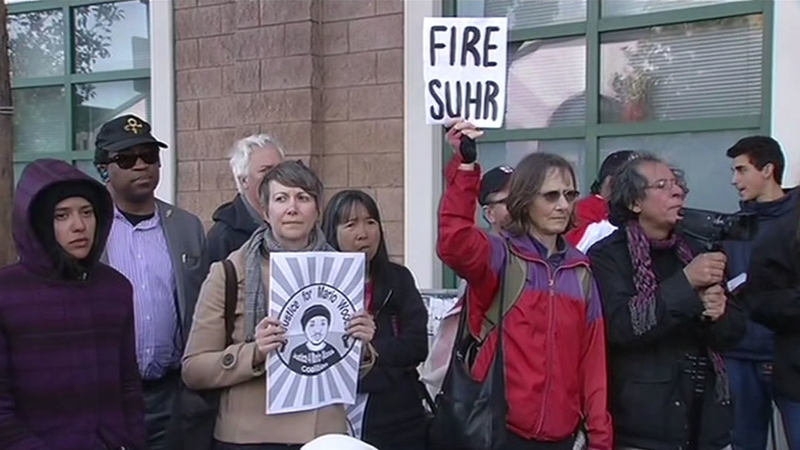 Protesters joined five people on a hunger strike in front of the Mission District police department in hopes of sending a message to police. The hunger strikers are heading into their seventh day without food on Wednesday.


"We have a megaphone for you, you are more than welcome to come out there and have a conversation," protesters said.

At the start of the Mission Police Station community meeting a demonstrator made a demand that the meeting be moved outside so more people could participate.

The answer was no. With that, the meeting ended and the protest moved back outside where a small group has been on a hunger strike for nearly a week.

RELATED: City considers reforms regarding SFPD use of force

"It's indefinite. There's no time. So I'm going to be out there as long as my body will allow me to be out there or the situation is rectified, whichever comes first," said Ike Pinkston, a hunger striker.

He and the other demonstrators want Police Chief Greg Suhr fired over deadly police shootings.

"I don't have any plans to resign. I plan to move the department forward," Suhr said.

The chief also said the hunger strikers will be left alone unless the situation becomes a health issue.

Officers did not interfere with the protest even when the group moved into the intersection at Valencia and 17th streets locking traffic for nearly an hour.

Community members demanding meeting be held outside because seating inside is limited. @SFPDMission pic.twitter.com/vfc919W0ag

#SFPD has roads closed around protest at 17th & Valencia. pic.twitter.com/ulhN1PFUKC