KGO
By Melanie Woodrow
SAN FRANCISCO (KGO) -- Irene Chan is talking to ABC7 News after a sea lion bit her knee while she was swimming at Aquatic Park in San Francisco Thursday.

Chan is surprisingly all smiles despite the attack. She says she's been swimming in the ocean more than 30 years. Chan says her first brush with a sea lion at Aquatic Park was three months ago when one got up underneath her body as she swam.

On Thursday, Chan started her swim like any other, greeting her animal friends with a song.

"Happy morning to you," Chan sang to the tune of happy birthday.

Sea Lion attack victim Irene Chan tells @abc7newsbayarea she sings to sea lions every am, jokes maybe they didn't like her song pic.twitter.com/qa1KgumM12

Chan jokes the sea lion may not have liked her singing.

"I tell all the sea animals, I'm very friendly to you, but I don't know, this one become so mean to me," said Chan.

After the sea lion bit Chan she called for help. Fellow South End Rowing Club swimmer Alice Ma was there.

RELATED: 30 years of the love-hate relationship with Sea Lions in the SF Bay

"I started swimming with her and I said, 'Do you want me to pull you back to the beach' and she said, 'No, no, I can swim by myself I just can't kick because the sea lion bit me on my knee,'" said Ma to ABC7 News during an interview Thursday.

Chan's son happens to be an ER doctor. "My son said you are very lucky mom," said Chan.

Especially because the sea lion didn't get a tendon.

Chan says she hopes to be back in the water by next week, even though she wasn't the first to have a run-in with a sea lion recently and might not be the last.

Irene says she feels very lucky sea lion didn't get a tendon. She's all smiles today and plans to get right back in the water pic.twitter.com/t2ZFKXanwN

Officials say a man suffered non-life threatening injuries after being bitten by a sea lion at Aquatic Park in San Francisco Friday, a day after another man was bitten while swimming in the area. 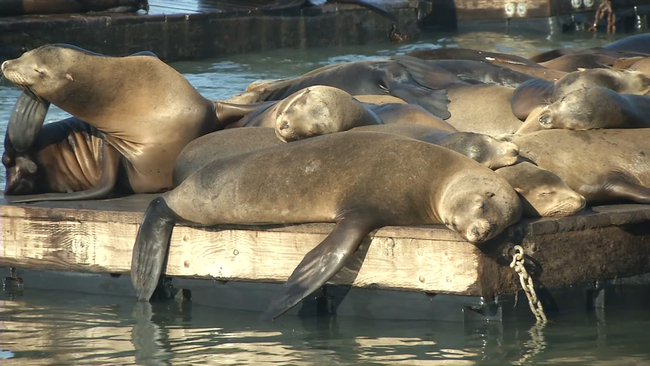