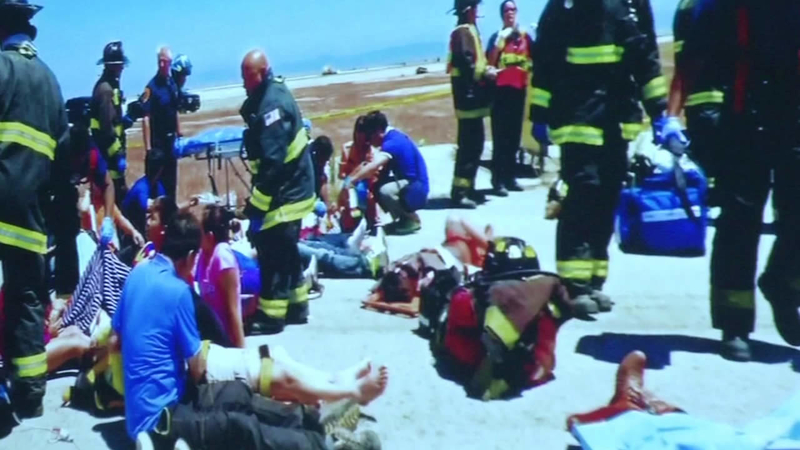 SAN FRANCISCO (KGO) -- As we approach the one-year anniversary of the Asiana Airlines crash at San Francisco International Airport, big changes are coming to the hospital where many of those victims were treated.

ABC7 News joined the nurses and doctors at San Francisco General Hospital on Monday for a look back at that tragedy and a look ahead at the hospital's future.

The image of the downed plane is burned into the memories of hospital administrators, and so is what came next.

In a video and slideshow, doctors and nurses recounted the tragedy that was also a learning experience.

"My pager went off," one woman said, with another adding, "It said mass casualty."

"We were prepared for burns and inhalation injuries," said Dr. Mary Margaret Knudson. "In fact, we pulled out all the burn packs because we had heard that the plane was on fire. And that's not what we saw. We saw bad spinal fractures. Some of them were with paralysis."

A jetliner crash with survivors is so rare, there's nothing written about how to handle one. So the team at San Francisco General had to improvise.

Gesturing during the photo slideshow presentation, Dr. Malini Singh said, "This is an example of the tents we set up just outside the ambulance bay, and this was to receive patients who had minor injuries."

But those tents won't be necessary if tragedy strikes again in a few years. San Francisco General is building a new hospital. And in a warehouse half a mile away, they've set up full-scale working models of the rooms.

"We can see x-rays mounted, cause they're digital, they'll be mounted up there," explained chief nursing officer Terry Dentoni.

Everything is high-tech, with equipment suspended from the ceiling.

"The less things you have on the floor, the safer it is in your operating room," said Dr. Knudson.

And beds that keep the blood flowing.

"These are air mattresses," Dentoni said. "So when patients are on it, it conforms to their bodies, so you plug it in and it inflates and deflates for the pressure points."

The innovations extend to the intensive care unit where perhaps the biggest change is the most low-tech feature of all -- the window."

"And for patients with traumatic brain injury, or who have been in the ICU for any length of time, they need to know night and day," Dentoni said.

Most importantly, there's more of everything -- more operating rooms, more equipment, and more space in each individual patient room. They can all house a second patient if necessary, doubling the hospital's capacity.

"Which is almost four times what we're able to take care of in our current emergency department," said Dr. Singh.

But when the new hospital opens late next year, there's one thing that won't change: the teamwork.