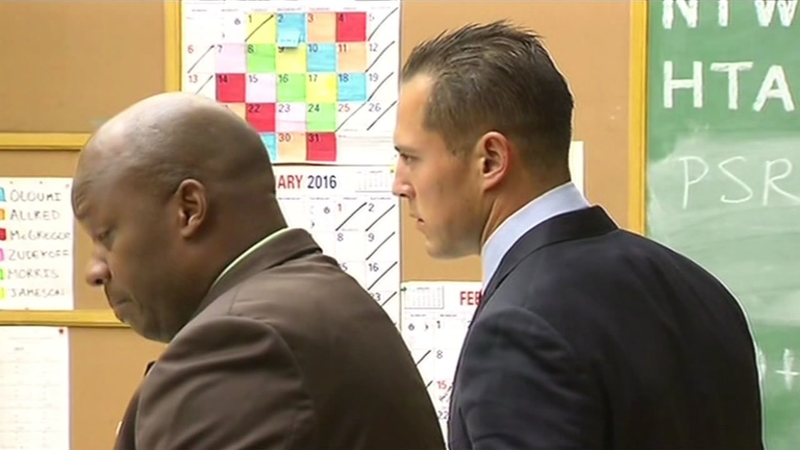 SAN FRANCISCO (KGO) -- A San Francisco police officer charged with two counts of felony hit-and-run faced a judge for the first time and pleaded not guilty.

San Francisco Police Officer Christopher Kohrs appeared in court for the first time since being charged with two counts of felony hit-and-run. There are two victims.

"All I can say is everyone that was injured in this incideny, I wish them all the best," Kohrs told ABC7 News outside the courtroom. Kohrs has nothing else to say to ABC7 News.

The accident happened around 2:20 a.m. Sunday morning on Broadway near Montgomery. Kohrs, known in better times as the "Hot Cop of Castro," is accused of being behind the wheel of his Dodge Charger and crashing into two men.

"The people that he hit were crossing against the red light, but what makes this very disturbing for me is that he left the scene," said San Francisco district attorney George Gascon.

Equally concerning says Gascon is the lack of a sobriety test until more than eight hours after the accident when Kohrs turned himself in.

When asked by ABC7 News if he was under the influence and if he ditched his car at the scene, Kohrs had no comment.

Surveillance video shows someone running from the scene. Kohrs' attorney says he's seen the video but doesn't know if it's his client.

"I think once his whole story is told, the whole story of that night, I think there will be a lot of things that are said and comes out that will pretty much explain everything that happened," said Kohrs' attorney Anthony Tall.