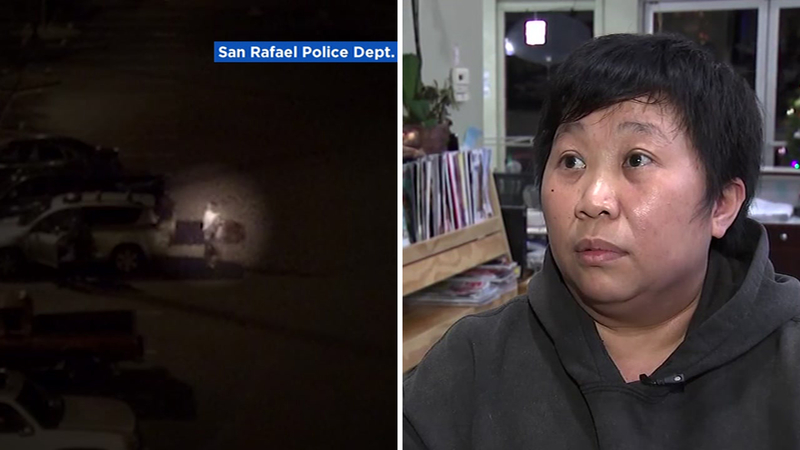 SAN QUENTIN, Calif. (KGO) -- A woman says the man who escaped from San Quentin threatened her before stealing her car, while she was shopping in San Rafael. A statewide manhunt is now on for Shalom Mendoza.

Dang Nguyen immediately recognized a photo of Mendoza as the man who carjacked her Wednesday night.

"He came very fast and he had something inside and said I have the gun. I need the key, give me the key. If not, I'm going to kill you now."

Nguyen was packing up her car around 9:15 p.m. in the Home Depot parking lot, which is less than two miles from the prison. Surveillance video shows the carjacking suspect walk up to Nguyen, who handed over the keys to her Rav4-- but not before rescuing her dog who was inside the car.

"He jumped to the car and then I said, how about my dog? I'm gonna take my dog now, please and then he just like, okay."

The suspect then drove away in Nguyen's silver 2011 Toyota RAV4, with California license plate 6STZ502.

Nguyen and her friend then ran back into Home Depot for help.

"I was scared to death," said Nguyen.

Sgt Justin Graham, with the San Rafael Police Department, said, "San Quentin has a long-standing reputation being a very secure institution. In the time that I've been here, I haven't heard of anything like this before."

Sgt. Graham said they have not definitively linked Mendoza's escape with the carjacking. But, the timing, location and Nguyen's description are all solid evidence.

Also, Mendoza is serving a five-year sentence for using a deadly weapon during an attempted carjacking in LA County and evading police.

Mendoza is 5' 5" with a tattoo over his right eye. It's unknown where he was headed.