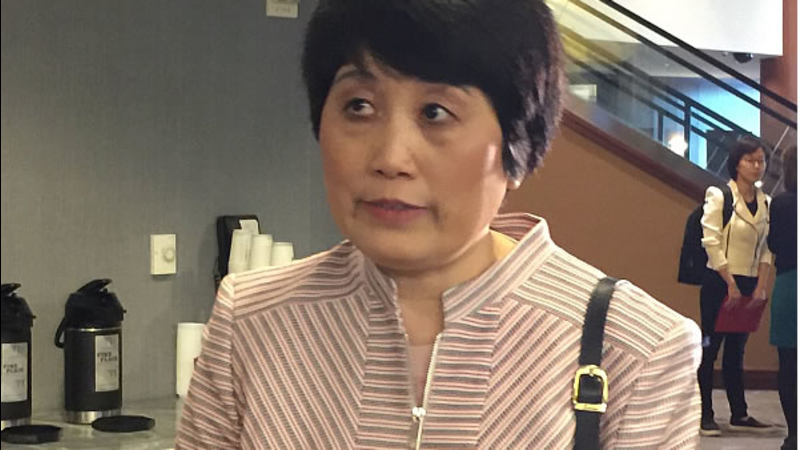 SANTA CLARA, Calif. (KGO) -- Hydrologist Sherry Chen spoke publicly for the first time in Santa Clara Friday after a judge ordered the US Weather Service to restore her job with back pay after she was accused of espionage in 2014.

It has been nearly four years since Chen, a naturalized U.S. citizen, was accused of being a Chinese spy. A hydrologist by training, she worked for the National Weather Service near Cincinnati where she won praise and awards for her work, building a model to forecast flooding along the Ohio River. She saw her work as important to protect American lives and property.

The Department of Justice filed hundreds of indictments against her; if tried and found guilty, she could have spent 25 years in prison and could have been fined $1 million under the federal Economic Espionage Act. However, the government dropped the charges five months later. Despite that, she was terminated by the Weather Service. "I loved my job," she said.

Hydrologist Sherry Chen speaks publicly for first time in Santa Clara after judge orders US Weather Service to restore her job w/back pay after being accused of espionage in 2014. Charges were dropped against the US citizen. #abc7now pic.twitter.com/xQ1LKi9NsZ

Last week, an administrative judge ordered Chen to be reinstated to her position with back pay. She made her first public comments in conjunction with her attendance at the annual conference of Committee of 100, a nonpartisan group of prominent Chinese Americans in business, government, academics and the arts. Committee of 100 has been a major supporter of Chen's efforts for justice.

Chen says she intends to go back to her work, forecasting floods. However, her case is far from over. Her employment attorney, Steve Simon, said he is preparing a lawsuit against the Department of Commerce for malicious prosecution and false arrest. A representative of the agency, contacted by ABC7 News, said the department plans to appeal the reinstatement order.

The heart of the government's case was suspicion that Chen had access to a secure computer database for which she did not have a password. She obtained the password from a co-worker. Chen maintains it was a shared office password. Her intent was to do some research to answer questions from a Chinese official she knew about how water system infrastructure repairs are funded in the U.S. She had also asked an official from the Army Corps of Engineers for information. At that person's request, Chen put the Chinese official in contact with the Army Corps official.

The judge who has ordered Chen's reinstatement was critical of the termination process for, in the court's opinion, excluding evidence that would be favorable to Chen. The court ruling indicates the information Chen was seeking was public information and not secret or classified.

Chen says the ordeal has been painful for her.

Andrew Kim, a visiting scholar at South Texas College of Law, has done an analysis of the Economic Espionage Act and he believes that the U.S. Department of Justice "has improperly targeted, engaged in racial profiling of, and used biased judgment with respect to Asian Americans and Asian nationals suspected of espionage."