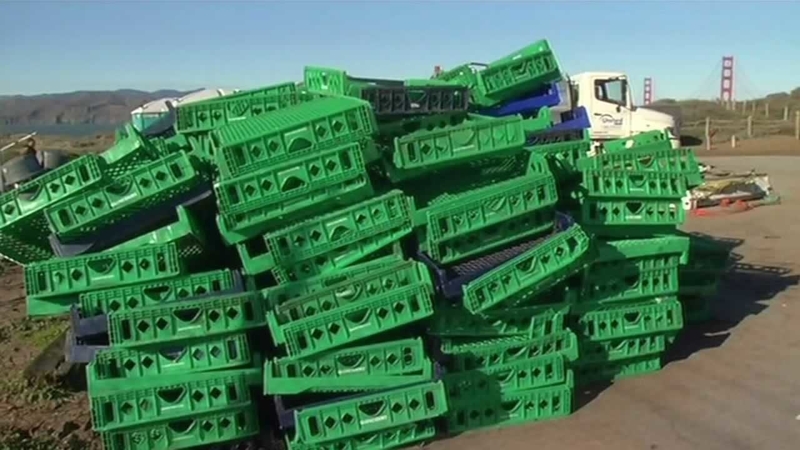 SAN FRANCISCO (KGO) -- Twelve containers fell off a cargo ship on Friday and now Coast Guard officials are checking out beaches across the Bay Area.

So far, they've found a shipping container at Bake Beach in San Francisco. Items from one of the containers washed up at Mori Point in Pacifica as well.

Stacks of green and blue pallets and a pile of mangled metal, what's left of a shipping container, washed ashore Sunday after being knocked off the ship in rough seas. But there's still possibly 10 or 11 others unaccounted for.

Bakery pallets continue to wash ashore in Pacifica, after 12 containers got knocked off a Matson ship this weekend. pic.twitter.com/jEEWk3DfGW

This is a concern for the nearby Farallones Marine Sanctuary.

"If the container is to sink, it could cause damage to living habitats like coral reefs and sponges," spokesperson Max Delaney said.

Each container weights about 2.5 tons.

Along the beaches in Pacifica, people have stacked pallets neatly from a second possible container, but Styrofoam lining is scattered everywhere.

@svqjournalist here is what ended up on baker beach pic.twitter.com/OwGZL2qbRB

The Coast Guard has an ongoing advisory up and down the coast because of the still unaccounted for containers.

"Basically telling mariners in the area that there may be containers. And just to be extra cautious when transiting," U.S. Coast Guard spokesperson LtJg. Jake Urrutia said.

A Matson spokesman says all 12 trailer-sized containers were packed with empty plastic pallets so there's little to no harm to people.

They were washed overboard Friday night about eight miles off shore when the bar pilot onboard was transferring back to his boat.

A 19-foot wave broadsided the Matson ship, called the Manoa.

No one was injured and it has since made it safely to Seattle.

Beach residents say the waves have been treacherous for days now. "Here it was bad for an hour but the waves were insane for a couple days before that," SF resident Jenifer Schmidt said.

Matson Shipping is picking up the bill for the cleanup but they could use some help spotting the remaining containers.

If anyone sees one near shore, it would be a good idea to call the local police of the Coast Guard.

And you can find the contents now on Baker Beach. pic.twitter.com/bEtRrMRnWA

Washed up crates from dumped container on baker beach. pic.twitter.com/kLzdi8Is8H

High winds and seas caused a shipping container to break up off Baker Beach. Not hazardous, but messy. pic.twitter.com/7spDMNr2gw