7 On Your Side: High tech fridge can run into more issues

KGO
By Michael Finney
ALAMEDA, Calif. (KGO) -- We've come a long way since the days when ice boxes kept your food cold. Today's refrigerators come with temperature controls, water filters, even embedded TVs, but there's a lot that can go wrong too, as one Bay Area woman found out. She turned to 7 On Your Side for help.

If it's possible to love an appliance, this woman did. Like everything high-tech, her refrigerator had a computer system with multiple controls. But sometimes the more complicated the appliance, the more things can go wrong.

Alameda resident Keri Spaulding loved everything about her new KitchenAid refrigerator: the filtered water, the ice, the crisper big enough for party trays, plus a pull-out freezer and it all fit in her kitchen.

"I would tell everyone I love my refrigerator because I really did. I was enjoying it so much," Spaulding said.

And she was -- that is, until things started going wrong. She said, "One day I noticed some moisture at the top of the refrigerator."

The fridge was just four months old when droplets began to form. A technician came right out and said it needed a part and that they would order it. However, before the new part came in, a new problem came up.

"The computer screen went out, so I had no ice and no water," Spaulding said.

Another repairman came and put in another new part, but it didn't help. They said the computer was a different problem and so there was another repair.

Spaulding said she lost track of how many repairs there were. She estimated six or seven. So finally, she contacted KitchenAid which sent her a new door, but things went from bad to worse.

"He could not connect the door to the refrigerator and to the computer," Spaulding said.

It turns out the computer was damaged and the thermostat was out, so the fridge wouldn't stop running.

"It was just kind of exasperating," Spaulding said.

Finally KitchenAid said the fridge was unrepairable, but still under warranty. So, she could have a new one. Spaulding was excited about that, except that didn't happen either. She waited for weeks and weeks.

"They said, 'We're really sorry that this was delayed.' And then I said, 'OK, I don't know what else to do. I'm calling 7 On Your Side," Spaulding said.

We contacted KitchenAid's parent company, Whirlpool, and it promised a new refrigerator right away. The company didn't say what caused the technical problems or the delay, but tells us: "There are unique cases in which Whirlpool sometimes offers to replace an appliance rather than repairing it. After careful review of the service history of this refrigerator, Whirlpool offered to replace it at no cost to the customer."

Sure enough the new one just arrived.

"I was thrilled, just absolutely thrilled when I called 7 On Your Side," Spaulding said.

She tells us her new refrigerator works perfectly, Whirlpool sent a great team to set it up and the filtered water is just right.
Related topics:
shoppingalamedawarrantycomputerstechnologyappliances7 on your sideconsumerconsumer concerns
Copyright © 2020 KGO-TV. All Rights Reserved.
RELATED 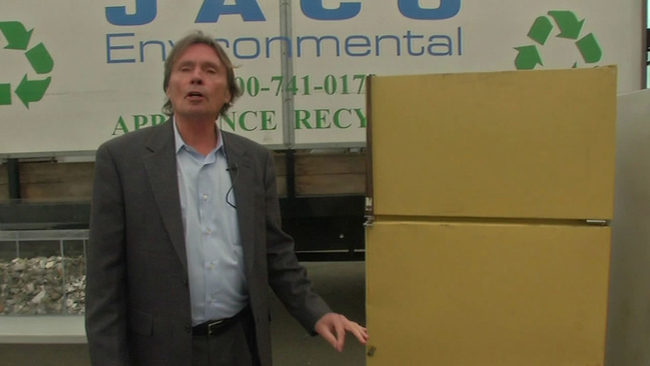