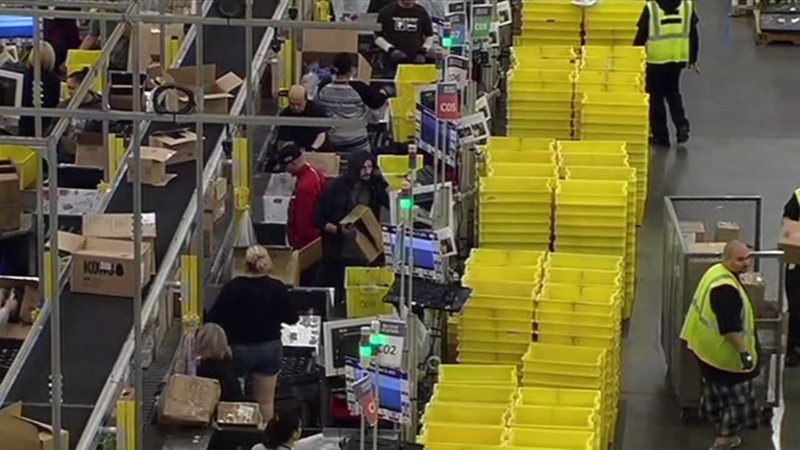 TRACY, Calif. (KGO) -- It's Cyber Monday, the biggest online shopping day of the year. Amazon is using new technologies, including robots, to help fulfill millions of orders this year.

Cyber Monday deals start a lot earlier these days, so companies are waiting to see whether this day is as strong as in the past.

You click "place your order" and things are kicked into action at the Amazon Fulfillment Center in Tracy. On Cyber Monday, Amazon.com employees say they rarely see a break in the action.

Amazon is cranking out the packages today !! Estimated 500 orders coming in per second #CyberMonday pic.twitter.com/RwYXnjN5Mg

Employee Courtney Barrios will work a 12-hour shift Monday to keep up with the demand. "It's a lot busier but we've kinda gotten it down," she said.

The National Retail Federation is actually predicting that sales might be a bit slower this Cyber Monday than last year because people now shop online all weekend.

Cyber Monday 2015 shopping guide
Whether you're an expert shopper looking for that one special item or just planning to browse the deals, use this guide to help you through the day.

The idea of waiting until Monday is becoming a thing of the past.

Amazon executives say they now think of Cyber Monday as a season, not a day.

"We're not seeing the same thing we saw a couple of years ago, where people come in to work and get on their computers and they want to shop in the morning. People that have Wi-Fi all day," Amazon spokesperson Sarah Gelman said.

An Amazon employee says he is already MUCH busier today than he was on Black Friday. #CyberMonday #Whew pic.twitter.com/VoGDasqvzO

But they still think Monday will be huge. "Last year on Cyber Monday, it was our busiest day of the year. Amazon customers ordered 43 million products worldwide," Gelman said.

They have brought in robots to help handle the demand. They move 5 feet per second and can carry 750 pounds.

"Basically what they're doing is they're picking up shelves and moving them to associates that are standing at ergonomic work stations," Gelman said.

This is the first holiday season Amazon has had them in all 13 of its U.S. facilities. Executives think this will get the orders out even faster and into the hands of Barrios, who says wrapping your presents gives her an advantage when it's her turn to shop. "You see a lot of items, it's giving me a lot of good ideas for my son to get him for Christmas, almost too much," she said.

Orders placed today are already shipping out. That's because Amazon has hired an extra 100,000 people across the country to help get them through the busy holiday season.

Amazon does have some deals just for Monday, and it's working. The company is expecting to see about 500 orders a second.

Amazon has posted video on YouTube of the service it's calling Amazon Prime Air. Amazon says its drones are ready as soon as they get regulatory support.