KGO
By by Elissa Harrington
COLMA, Calif. (KGO) -- Shoppers around the Bay Area flooded stores on Thanksgiving right as the doors opened. Many camped out ahead of time, determined to get the best deals.

"I wanna be the first one," said Roman Ancheta.

Ancheta has been sitting in a fold out chair outside Best Buy in Colma since 8 a.m. Wednesday. His family's at home cooking Thanksgiving dinner while he's in line.
Ancheta is after a 50-inch Panasonic TV for $199. It retails for $550.

"If you want the deals, you gotta come here early," he said.

Thanksgiving Day shopping has become the new Black Friday. More and more retailers are opening their doors on the holiday, offering doorbuster deals a day early.

David Cruz put a tent up, sleeping in chilly overnight temperatures to snag some electronics.

"I hope they don't do this, you know, year after year," he said. "Black Friday should be just Black Friday."

He admits the early deals are too good to pass up. But he's missing time with family.

So were other deal-seekers, trading homemade turkey and mashed potatoes for fast food chicken nuggets and fries.

Catherine Tran waited outside Target. She says her family celebrated Thanksgiving on Wednesday so they could take shifts holding a spot in line on Thursday.

"I'm taking a two hour shift first and then we will switch," she said.

Shoppers were there here by choice, but some employees at major retailers were not.
Thousands have signed online petitions, including one for Kmart workers, saying they risk being fired for taking Thanksgiving off.

"You know, everything nowadays is about money or profit margins," Cruz said. "So it's kind of sad but hey, what are we going to do?"

One California lawmaker has an idea. Assemblywoman Lorena Gonzales plans to introduce a bill that would double holiday pay. She hopes to introduce it as early as next week. 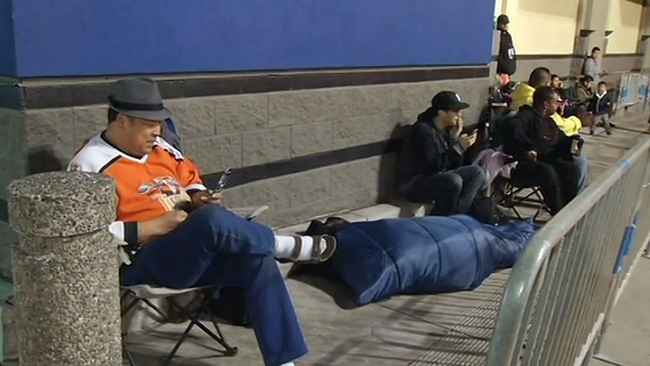