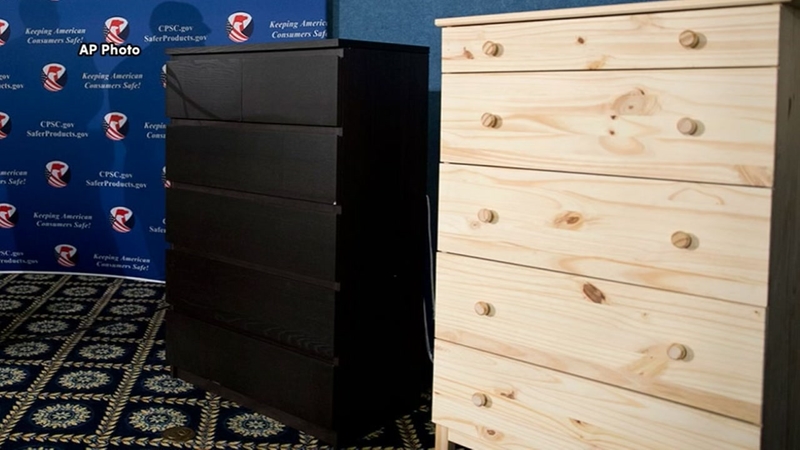 IKEA is recalling millions of dressers because of a "serious tipover hazard,'' Eight children have been trapped and killed. Dozens more were injured.

The recalled dressers include several models made by "Malm" and other Ikea brands. The dressers can be prone to tipping over and crushing or trapping a child. Eight children have been killed by a fallen dresser, and 140 injured.

The latest fatality happened in May when a Southern California toddler was found trapped under a Malm dresser.

Ikea has been warning of the tip-over risk for several years -- but says many consumers are still unaware of the hazard. The biggest danger comes when kids try to climb on a chest-of-drawers, usually trying to reach for something. If it's not properly anchored, it can easily fall over.

Care givers should return the dressers for a refund or make sure they are securely fastened to a wall. You'll find all the information on affected models and possible remedies here:

The California Public Interest Research Group (CalPirg) released its annual "Trouble in Toyland" report - coinciding with the start of the holiday shopping season.

Calpirg says dangerous or toxic toys can still be found online or on store shelves, in spite of recalls and warnings.

The group says even simple toys like balloons pose a risk. Care givers may not realize balloons cause more choking deaths than any other single toy.

CalPirg is also warning about internet-connected toys. For example consumer groups have raised concerns about the "My Friend Cayla" doll which uses internet connections to respond to children's conversation. CalPirg says companies may be collecting and sharing data.

The report also warns about toys with small parts. For toddlers, toys should have pieces too large to fit through a toilet paper roll.

Other toys may contain high levels of lead. CalPirg and other groups warned some fidget spinners have high lead content.

Finally, watch out for toys that have been recalled but are still available in some marketplaces. For example, the report says some recalled hoverboards with faulty battery packs may be available. They can pose a risk of fire if the batteries are left on chargers.

Parents are putting out a warning about a popular toy known as "Fingerlings" - Turns out, some may be fakes.

Fingerlings are small robotic monkeys that wrap around your finger. They move and make noises.

They're so popular and hard to find, counterfeiters are taking advantage.

Some parents reported they bought monkeys from third-party sellers online. But they noticed, the ones they got appeared poorly made, and did not move at all.