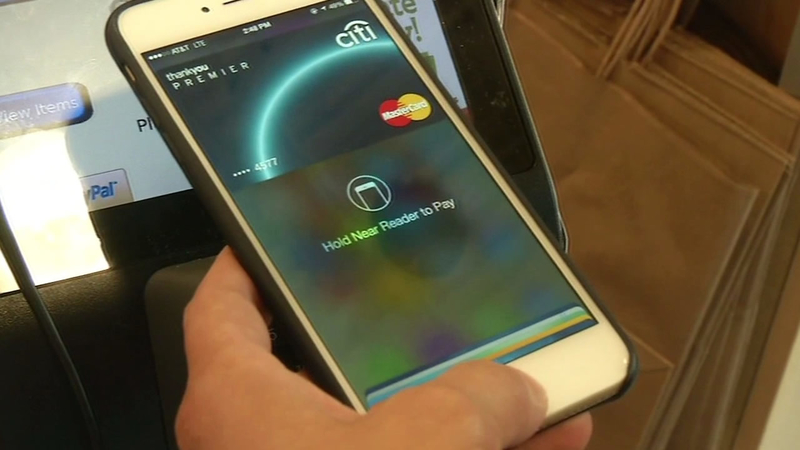 SAN MATEO, Calif. (KGO) -- Cash, credit, or debit? This holiday season there's a new way to pay -- by using your smartphone. The technology, however, is still very new. So don't be surprised if you encounter a few bumps.

As retailers swipe card after card, every so often, a shopper shows up with a mobile payment app. Sometimes it even surprises the clerks.

"I found out through watching a customer use it," said Toys "R" Us cashier Maya Dababo. "So I just started using it myself."

"The fact that I don't have to actually carry my card," she said. "I mean, I usually forget my wallet in the car."

"We're supporting Google, we're supporting Apple," said Toys "R" Us store manager John Eikenmeyer. "Right now it's kind of a fledgling industry. We're not seeing a lot of payments. This time next year, we anticipate a lot of growth in that area."

"It's convenience," explained iPhone 6 owner Ryan Yee. "Don't have to take out my wallet, just bust out my phone and it works."

But for Android, VentureBeat writer Mark Sullivan says the much older Google Wallet works at a lot of the same stores.

But tapping your phone to pay doesn't work everywhere. In fact, at some of the nation's biggest retailers -- Target, Best Buy, Walmart -- you can't use Apple Pay or Google Wallet. And that's not an accident.

Notice that Target has the same credit card terminals as Toys "R" Us.

"They're doing it on a software level and blocking it from working that way," said Sullivan.

The VentureBeat writer says those retailers are backing another payment app called CurrentC. And they've all agreed not to support the competition.

"I'm not exactly too thrilled about it, because of the fact that they are blocking a very progressive and new way of paying for things," said shopper George Bonvanie.

The decision could be financial. Sullivan says CurrentC draws straight from your bank account.

"They're making it so the merchants don't have to pay the credit card fee," Sullivan said. "The two percent to three percent transaction fee that they hate,"

They'll try to make it worth your while by integrating coupons and loyalty cards right into the app. There may be only one winner.

"It's gonna be a bit of a headache if you have 10 different wallets on your phone," Sullivan said.