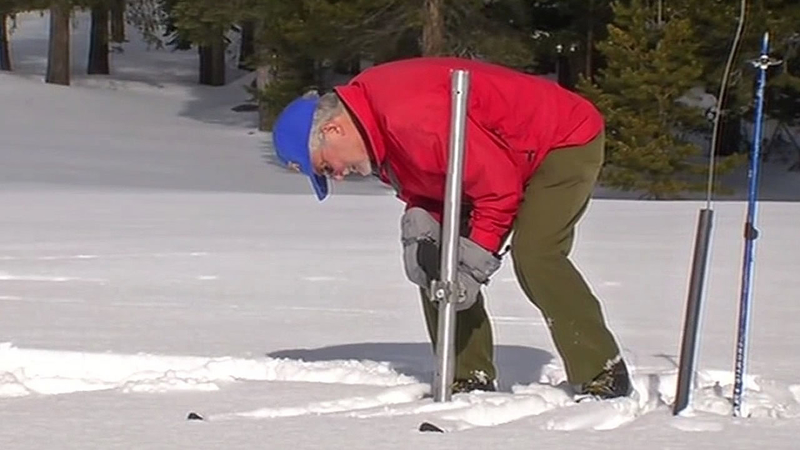 EL DORADO COUNTY, Calif. (KGO) -- There is encouraging news for the Sierra Nevada snowpack. Season's first survey found the level at 136 percent of normal. This is after nearly no snow at the site in April.

State officials remain hopeful, but they say it is still too early to tell whether or not this will have much of an effect on the drought.

The California Cooperative Snow Surveys Program chief, Frank Gehrke, said, "That El Nino is supposed to really start to kick in as we move on into the rest of the winter and on into the spring."

Gehrke was in the Sierra conducting the state's first manual snow survey of the season. At Phillips Station, the snowpack measured about five feet, which is roughly 136-percent of average for that particular location. Overall, the Sierra is nearly 110 percent of average.

#BTS: My photographer is the man! He's not afraid to sink into the snow to bring you the images you'll see tonight. pic.twitter.com/nsYudpOXk3

Up at Sierra-At-Tahoe Resort, there were smiles all around as people took to the slopes to enjoy skiing and snowboarding.

Oakley resident Dylan Eddy said, "It's beautiful, I really love it. Everybody's happy, and everybody's not getting into fights or anything, which is really nice."

Skiers and snowboarders were seen soaking up the sun and the snow.

Half Moon Bay resident Willie Virhen said, "Honestly, it's kind of like, just a breath of fresh air, like the last few years have been bone dry, you know, and not good riding at all, but this year it's back. It's good."

This is a big change from the last snow survey. Back in April, when the snowpack was only five percent of average, the grass could be seen at the location where they usually take the measurement and the mountains had only a light covering of snow.

The mountain snowpack is critical in California because it provides 30 percent of the state's fresh water in a typical year.

"We still need a solid four months of storm activity to even have decent reservoir recovery, let alone actually having it full at the end of the season," Gehrke explained.

Californians are holding out hope that Mother Nature will cooperate.