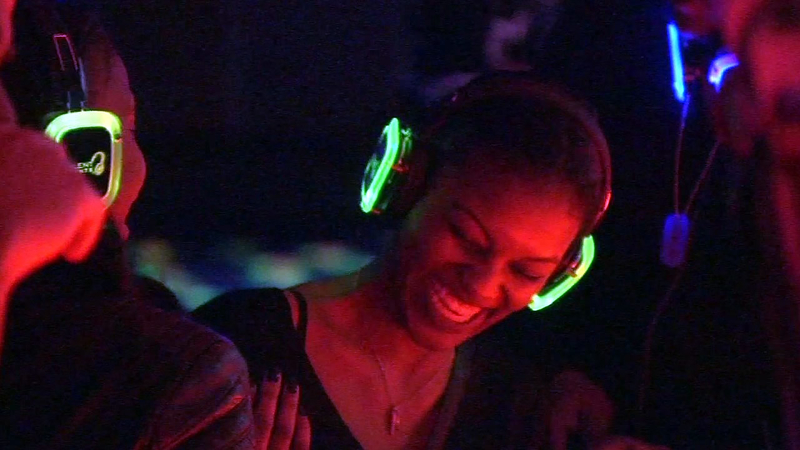 SAN FRANCISCO (KGO) -- The Bay Area loves to party and now a growing number of party-goers are having their fun very quietly. The concept is known as "Silent Disco." That might sound like a contradiction, but it's got a lot of people dancing.

You can find silent disco parties at clubs, at the beach, even at a museum - anywhere you've got people ready to rock.

At first glance, it looks like everyone is dancing in a silent space. But they are actually hearing music through wireless headphones linked to a transmitter at a D.J.'s turntable.

ABC7 News' Drew Tuma tried it out at a fundraising party at the California Academy of Sciences in Golden Gate Park. A company called Silent Storm provided the headphones, which block all the outside sound.

When you put them on, all you hear is crisp, clear music and at a volume you control.

There are three channels of audio with different music on each one. You can tell which channel your friends are listening to by the color of the lights.

Party goer Kayla Salvato of Walnut Creek loved the experience. "It's really weird. You kind of wonder why they're moving and dancing. But you put your headphones on and you are right with them," she said.

Stephanie Margossian of Foster City called it amazing. "You almost feel like you are dancing in your room. You are not even with the crowd," she said.


When you want a break, you simply take off the headphones.

The room is quiet enough that you can actually have a conversation or sometimes to listen to people sing.

Jasmine Kinsey from Philadelphia, said she forgot people could hear her as she was singing along to the music.

The concept is so popular that there are now about a dozen companies offering some version of silent disco.

One called Hush, has headquarters in a former fire station on Treasure Island. The guts of the operation are boxes full of thousands of heavy-duty, high-tech headphones. You can rent them and throw your own silent disco party or try them out at the wide range of public events.

Hush founder Robbie Kowal says the headphone parties are tailor made for urban neighborhoods where residents want quiet, yet part-goers want to hear their music loud.

"This doesn't necessarily have to be a fight. This struggle doesn't have to have a loser. This is a solution that appeals to everyone" Kowal said.

A club called Monroe in San Francisco's North Beach neighborhood has silent disco events the third Friday of every month. They don't even start until 10 p.m., but since everyone is wearing headphones, the neighbors don't have to hear the music.

Silent disco providers say another big plus is that when you get to choose the song you hear, almost no one sits out a dance. Eddie Ross, with a company called Silent Events, says it's perfect for friends who don't all like the same music. "Everyone can hear what they want. Everyone's happy in one place," he said.

Quiet Events: Monroe Lounge in San Francisco on third Friday of every month