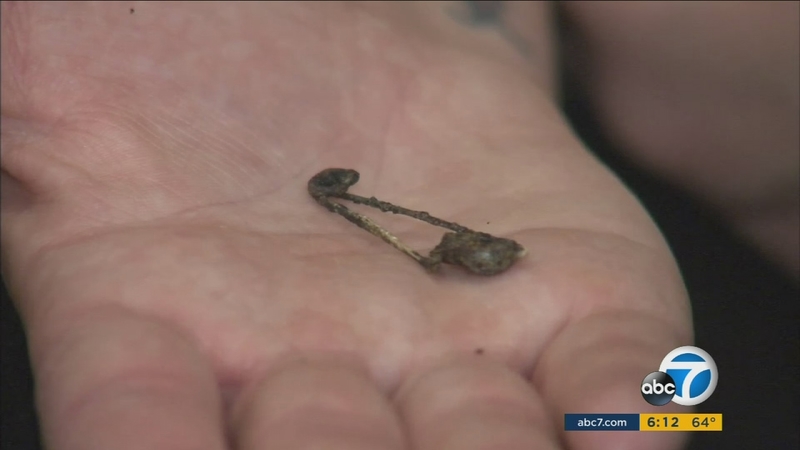 HEMET, Calif. -- Khloe Russell is back to doing handstands and cartwheels.

Khloe is feeling better for the first time in six months. She says she no longer has to stop every five minutes to blow her nose.

"About six months ago, her nose just started (running) out of this one side. Green, green, green constantly and it stunk," said Khloe's mother Katelyn Powell in an exclusive interview with ABC7 Eyewitness News.

While Powell says Khloe never complained of pain, she took her to three different doctors to try to figure out what was wrong. She says all three doctors thought she had a sinus infection and prescribed antibiotics.

"We went home, did 10 days of medication, didn't work," recalled Powell. "We took her even to the dentist because we thought it was her teeth -- nothing."

Then last weekend, the mystery illness was solved.

"My brother was like, 'Your nose, it's disgusting. Blow your nose, blow your nose.' And she blows it and out comes the safety pin," said Powell.

Black and disintegrating -- the safety pin was measured about 1.5 inches long.

"It was a huge object. It was bigger than her nose," said Powell. "We were horrified. I was like, 'Did you put this up there?' She did, but she forgot to tell me."

Khloe reluctantly reveals she was building a castle with safety pins six months ago when one ended up in her nose.

Powell says she doesn't blame the doctors. The pin didn't show up when they used a scope in her nostril. She says she's just happy it's out, and the symptoms have disappeared.

Powell says she has scheduled a doctor's appointment for Wednesday to make sure there's no lasting injury or infection.