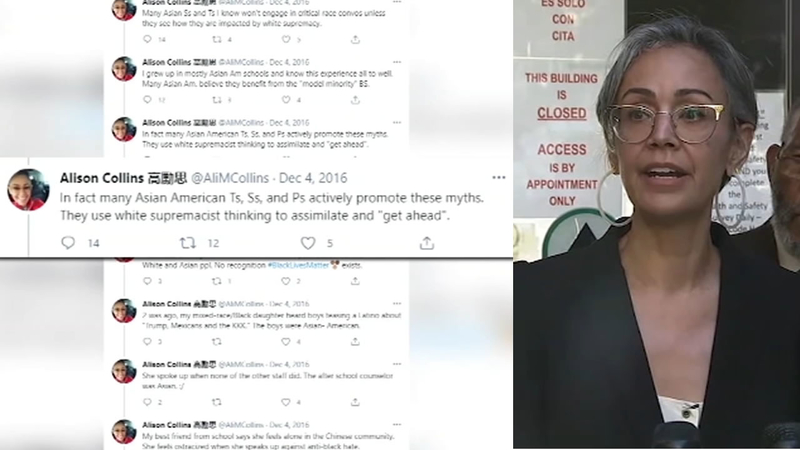 Asian supporters come to defense of SF school board member

SAN FRANCISCO (KGO) -- The San Francisco Unified School district has been under heavy scrutiny over the last year, with the most recent focus on school board member Alison Collins.

To provide a recap, a group working to recall Collins and other board members circulated a series of offensive 2016 tweets where Collins wrote in one that many Asian Americans use, "white supremacist thinking to assimilate and get ahead."

Collins was not a board member at the time and said the tweets were in response to Asian American kids at Francisco Middle School harassing a Latino student.

Many felt the tweets were spewing anti-Asian rhetoric. The school board voted to strip Collins of her title and committee assignments. She responded by suing the district and her colleagues.

"Those messages were not racist," said Lowell High School alum Vivian Tong, "I think they could have been worded more tactfully, but she was in such a position of pain. A lot of us in the Asian community don't speak up enough."

Tong graduated from Lowell High School in 2012 and said she saw racial discrimination at the school directed towards Black and Brown students. There have been rallies in the past addressing this issue.

Tong and ABC7 News anchor Jobina Fortson talked on Zoom with several other supporters of Collins who said she wasn't offered restorative justice. Ina Dang is a Lowell Alum and put her four children through SFUSD schools.

"There were several times where I was so frustrated because race relations were not addressed that I could understand and I actually identified- her tweets actually resonated with me," Dang said.

"Just the screenshots," Dang continued. "It's really...is actually taking advantage of the pain of Asian Americans right now and using it as a tool to get what they want."

San Francisco Board of Education Vice President Alison Collins' apologized for her offensive tweets aimed at Asian Americans as multiple board members called for her resignation.

"It was very interesting that they didn't surface, at least I didn't see them in the media or throughout the community during her election," Diane Gray, a Lowell High School alum said. "So, it's very suspect to me that it's showing up now."

The elite Lowell High School is at the center of the controversy. In February, the school board voted to remove Lowell's merit-based admissions process for a lottery system to increase diversity. Collins, who is the only Black female board member, is a vocal supporter. Asian students make up the majority of the student body at Lowell, while 1.9% are Black. Black people make up 5.2% of the population in San Francisco.

"Lowell High School is not a private school," President of the SF Alliance of Black Educators Virginia Marshall said. "It belongs to every citizen in San Francisco."

Collins' tweets were dug up by Diane Yap, the Vice President of the Friends of Lowell Foundation.

Yap said she heard the following from a fellow Lowell High School alum, "She said she might have heard the board, or someone on the board, say they thought there were too many Asians at Lowell and I said you know that's terrible."

Following that statement, Yap said she started looking up all the board members. However, this is where Collins supporters call out Yap. They said Yap's commentary online fuels anti-blackness and that's why she doesn't want Lowell to change.

Jobina Fortson: "What is your response to people who believe you have anti-Black sentiments that are driving this whole argument for you?"
Diane Yap: "I don't know whether to be flabbergasted or flattered. I am nobody. I have no power over anything. All I did you know, was I found some tweets."

Yap wrote the following statement in a Lowell High School alumni Facebook group: "All minorities have faced systemic racism in this country. Yet, some minorities are outperforming white students academically while some are not. This indicates that systemic racism does not have a consistent or causal effect on academic performance."

When asked if she could see how the statement was offensive, Yap appeared to not understand. ABC7 News anchor Jobina Fortson explained how the statement could be seen as veiled in anti-Blackness and minimizing the unique struggles of Black students. Yap said that was not her intent.

"I guess my only point is to say systemic racism does not necessarily cause students to perform worse than the benchmark of white students," Yap replied.

The whole saga involving Lowell High School and Alison Collins carries a lot of hurt and it's gotten ugly, but it appears the lottery may be working in increasing admissions for Black and Hispanic students

Preliminary demographic data from SFUSD for the 2021-2022 school year admissions shows the percentage of Black students increased by 2.9% and by 10% for Hispanic students. The number of white and Asian students shows a slight decline but still, makes up the majority.

Mayor London Breed and 10 of the 11 San Francisco Board Supervisors have asked that Collins step down.