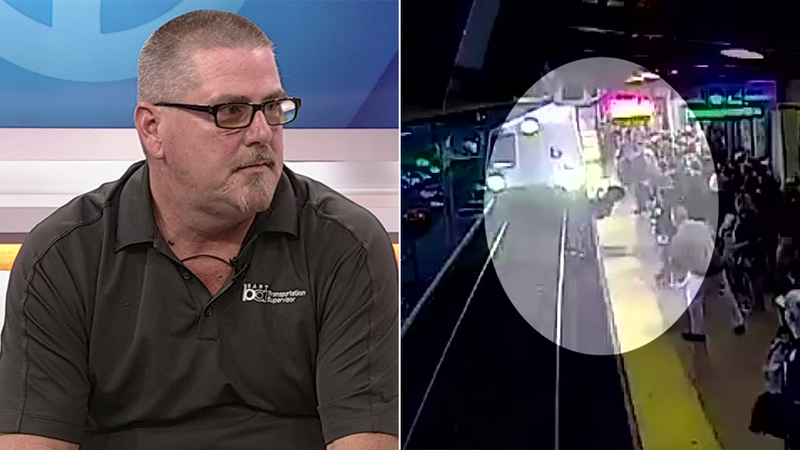 OAKLAND, Calif. (KGO) -- The hero who rescued a man from the tracks at the Oakland Coliseum BART station appeared on "Midday Live" to talk about his heroic actions.

BART Transportation Supervisor John O'Connor was working at the Coliseum Station to help with crowd control after the Raiders game Sunday when a man fell into the trackway. As a train was quickly approaching, O'Connor grabbed the man by the shoulders and pulled him up to safety.

Newly released video shows just how close a train got to a man rescued from BART tracks at Coliseum station.

"I was thinking he wasn't going to make it. That was my thought. And i just thought, I can't watch him die," O'Connor said.

O'Connor believes he was meant to be there.

"There had to have been some divine intervention for me to be standing right where this kid is going in. I mean, we're being looked after," O'Connor said.

The long-time BART employee does not believe he's a hero.

"I'm not trying to sound like the hero, or nothing, but if we in the world spread a little more love, and take a little more action and care about our fellow human beings instead of maybe what's on the phone or whatever is going on, it'd certainly be a better place."

O'Connor's action saved the life Rayshawn Jackson. The 33-year-old from Rancho Cordova is now saying this made him realize how precious life is.

O'Connor told Jackson after the save to pay it forward. Jackson is a Raiders fan and had been at the game.

"I hope he does great things with his life, and is prosperous in life," O'Connor said.

The Raiders will honor O'Connor at tonight's game for saving their fan. They also invited Jackson to the game. Jackson said he just couldn't bear to get on a train after that close call and took an Uber home from the game.

Watch ABC7's "Midday Live" every weekday at 11 a.m., right after "The View." You can also stream it live or watch it on the ABC7 News App.