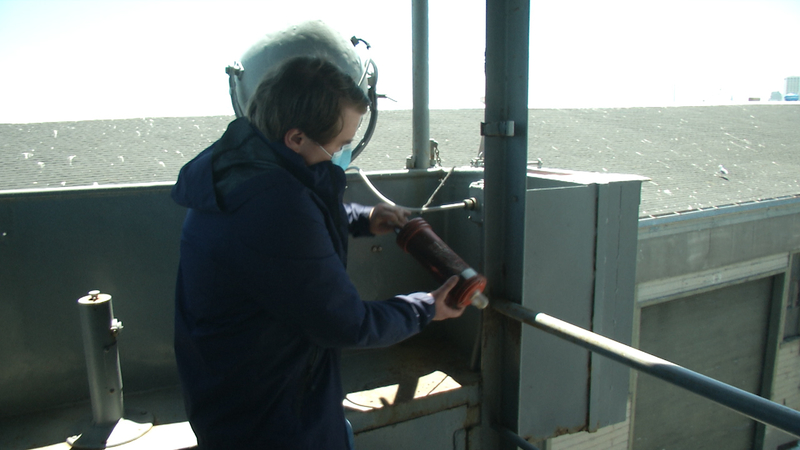 VIDEO: Drone captures before and after images of Pier 45 in SF following destructive fire

"I woke up to a phone call at 4:30 in the morning. I got a call to let me know the building next to the ship was on fire," recalled Lasher. "We saw photos of the structure fire and it looked like a volcano on the side of the pier. The fire was hot enough to melt steel."

It was early on Saturday morning, May 23, that firefighters got a call about flames shooting out of a fishing warehouse on Pier 45. The building is just 30 feet from the SS Jeremiah O'Brien, a World War II Liberty ship that carried cargo and supplies to France's Normandy after the D-Day invasion.

Lasher, who is the executive director of the National Liberty Ship Memorial, rushed to the scene of the fire expecting to find heavy damage to the ship.

For a while, it seemed like that is exactly what would happen. The wind was pushing the flames towards the ship, but fortunately the fire boats stationed themselves next to the ship to shot water into the warehouse. The stream of water going past the ship may have helped spare it from major damage. Even so, the vessel suffered minor damage costing thousands of dollars.


The glass in several port holes cracked from the heat of the fire, plastics in garbage cans and life rings partially melted and the heat shrink wrapped a tarp onto the side of a life boat. Lines that dock the ship to the pier that are made to withstand heat up to 545 degrees were severely burned.

The fire also warped plastic parts on the ship's radar.

"It doesn't look great but hopefully it works," said Lasher as he pointed out the damage. He still doesn't know if the radar's functions were damaged by the blaze. He is glad nothing of historical value was destroyed.

Replacing damaged items won't be easy right now. The historical ship has been closed to visitors since mid-March because of the stay-at-home order. That has put a hole in its budget. Nearly 70% of its revenue comes from fees people pay to visit the museum.

"This is a living, breathing memorial," said Kyle Day, the ships historian and events manager. "Having the ability to come aboard of a vessel and touch, feel, see things is much more impactful than seeing a photo or listening to a lecture."


2,710 Liberty Ships were built during World War II. They were rushed out to aid the troops at sea. Many were built at the Kaiser shipyard in Richmond. The SS Jeremiah O'Brien was assembled in just 56 days in Maine. It is now just one of two surviving Liberty ships. Almost all were disassembled after the war.

"The design was obsolete at the beginning of the war, but it was easy to mass produce them because of the triple expansion steam engine," said Day.

That old steam engine attracted film director James Cameron, who filmed the engine in action for the movie Titanic.


Before the COVID-19 pandemic, visitors could visit the engine room and view a model of the Normandy Allied operation aboard the ship's museum.

"It's an opportunity to demonstrate history and expose folks to the technology of WWII that helped to win the war," said Lasher.

The ship was moved to Pier 35 after the fire and will stay there until repairs are made to Pier 45. Lasher hopes to welcome visitors again at either pier when museums are allowed to reopen.

For now, the National Liberty Ship Memorial is raising funds to replace items that were damaged in the fire. You can donate by visiting the organization's website. 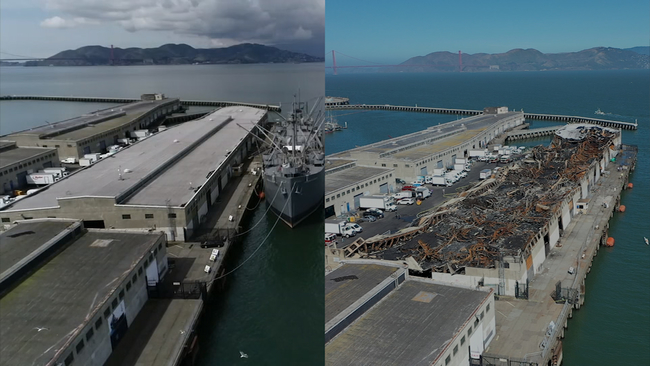