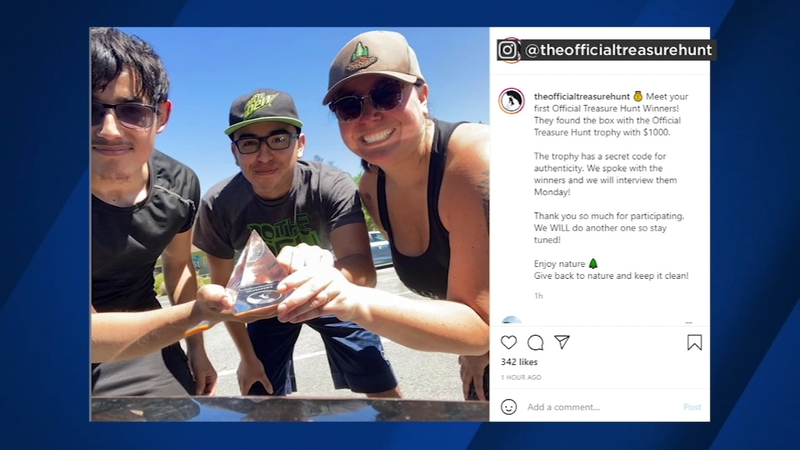 Organizers posted the details on their Instagram page Saturday.

Two men who organized the treasure hunt wanted to encourage people to go outside. They gave treasure seekers clues to take them to the hidden money in a state park.

It's been such a hit the organizers say they'll do it again.

There's a treasure hunt happening in the Santa Cruz Mountains where someone hid $1,000 in cash. Here are the clues we have so far.

Organizers posted the first clue for the treasure hunt Thursday. The clue reads, "A place fit for a Queen, can you smell what he's cooking?"

They say the box is on public land, so those seeking the prize do not enter any private land. The treasure is accessible through normal movement. Organizers urge the public to not attempt any dangerous moves or use any climbing equipment to access the box.

New clues are set to be posted on the account, the organizer tells ABC7 News.

"We were just thinking what's a great way to get people together and bring people to the outdoors, our favorite place," Co-founder Joe Rattay said. "Brendan and I always love a good treasure hunt. What gets you more excited than actually going out in the woods with a purpose to find something cool."

So far, all we know is the cash is supposedly on public land, somewhere in the forest and in a box.

Well, there's also a map with its approximate location circled. The circle includes a massive swath of the Santa Cruz Mountains, so we're hardly qualifying that as a hint.

"What we're going to do is post clues on our Instagram @TheOfficialTreasureHunt so follow us there," said Co-founder Brendan Ruh. "You'll get clues leading you in the general area where the box is hidden. So you can get closer and closer. Follow for weekly updates. It's publicly accessible, it's easy to access and it's not in any dangerous spot. Anybody can find it."

If this is a publicity stunt, it's not yet clear what's being publicized.

$1,000 isn't exactly chump change, but for these Bay Area natives, getting people outdoors is priceless.

"After COVID kind of relaxed and people were starting to get outdoors again, we wanted to do something to get families outdoors and get them exploring these beautiful parks," said Ruh.

"In a place like this, where people may get out and do a quick walk and not mess things up, yeah I think it's a good idea," said Daly City native Evan Huntzinger.

"We were actually saying that the actual treasure is the mountains and the ability to come out here and just explore," said Sunnyvale native Anita Lee.

"The weather is fantastic, it's summer time and it's pretty much the perfect time for a treasure hunt," said Rattay.

The account posted a message saying, "We wanted to do something fun to encourage everyone to get outside and explore our public parks and land! Gather some friends and find your treasure!"