Andrea Pook, spokesperson for EBMUD, said the first break was reported around 10 p.m Wednesday night. She believes the cause could be that too much pressure was applied on older pipes.

"The areas where the breaks occurred are kind of in the flat areas and what happened was, really on a daily bases our operators are monitoring how much water people are using and adjusting the water pressure in the system to meet those customers needs," Pook said. "In this case, it appears that there was too much pressure applied or pressure might have been applied too quickly."

"Certainly the number of breaks that we're seeing is more than I can recall," Pook said.

Pook said she knows that approximately 300 customers were effected, but she doesn't know how many are without water.

SKY7 flew over a few locations including Dwight and Edwards Streets, Camelia Street and 7th, and Sacramento and Allston.

The utility district said it happened at smaller distribution pipelines with what they describe has brittle and older pipes.

"We know that that area of Berkeley right was built at a certain time and so those pipes tend to be older," Pook said.

Affected residents could be seen carrying gallons of water back home, including Maria Orozco.

"We need to get ready for work, I need to, and now I have to wait. We also can't cook, can't wash all of our dishes," Orozco said. 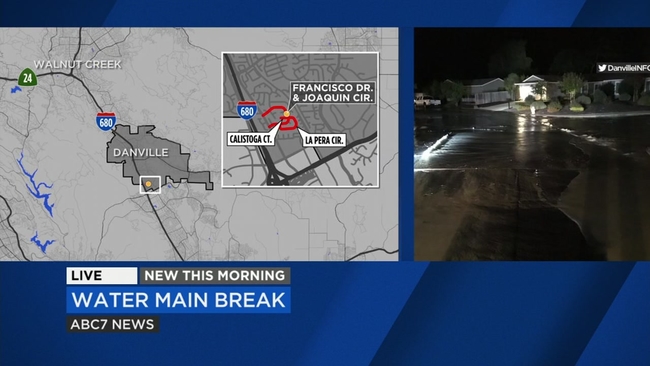