KGO
SAN FRANCISCO (KGO) -- The 2017 St. Patrick's Day parade theme is, "passing on traditions." Vice President of the United Irish Societies Valerie McGrew has a lot to share about some popular and lesser known Irish traditions.

"The parade has been going on for 166 years and United Irish societies has been putting it on for 80 years," McGrew said. "It's really important that we keep the traditions going on for future generations we always try to make the parade appealing for kids as well as adults and this year's theme is passing on traditions."

The parade celebrates Irish culture and the Irish dancers. Bagpipes are always a hit.

"Irish dancing is a popular tradition in Irish culture. There are different styles of dancing and the one people are the most familiar with is step dancing where like the river dance kind of dancing.," McGrew told ABC7 News. "Now I heard this story and I don't know if it's true but if it's not it should be. The British were repressing Irish culture. They couldn't dance in public because it was considered defiance of the rules They would go to the half doors and as the British went by they would they would dance with the lower part of their body because they couldn't see them. I've heard other stories but that's my favorite.

There are several traditional Irish instruments the tin whistle, the baran which is a drum, the cortina which is like an accordion," McGrew continued. "The fiddle of course, but I think the one that is most important to the people are the bagpipers."

Traditional jewelry is also a cherished part of Irish history and often passed on from generation to generation. The Claddagh ring is generally given to someone you love. The hands represent friendship, the heart represents love, and the crown represents loyalty.

"A really beautiful example of Irish jewelry are these brooches," McGrew added. "One is modeled after the famous Tara brooch which is home to the high kings of Ireland."

Irish jewelry is frequently made out of marble. "Connermara marble comes from county. They make some beautiful things out of marble in addition to jewelry," McGrew said. "I have a lovely set of rosary beads."

McGrew says there are a lot of woolen products coming out of Ireland. "It's not surprising the number of sheep match the number of people in the Republic of Ireland," she said.

She says the most famous woolen items are the Aran sweaters, some of which have symbols on them.

Making your own Bridget's Cross is another popular tradition. Saint Brigid is one of Ireland's patron saints. "In Ireland, if you talk about Bridget everyone has something to say how they practice their devotion to Bridget," McGrew told ABC7 News. "Probably the most famous ones are making Bridget's crosses."

McGrew adds that if you make one it's supposed to guard you against house fires. "After a year goes by, you burn it and make another one."

The cross is just one of many iconic symbols in Ireland. "The clay pipe has become one. Sir Walter Riley is the one who brought tobacco from the Americas to the islands of Ireland and England," McGrew said.

ABC7 News was told that these pipes would typically appear at Irish wakes. "You would fill them with tobacco and the shaft of it would be dipped in Guinness or whiskey," McGrew continued. "A couple of years ago we had an official from Ireland come out and he was impressed that the parade was something everyone in the city took part in. I think that's a great tradition we have that we get the support of the whole San Francisco community, not just the Irish community." 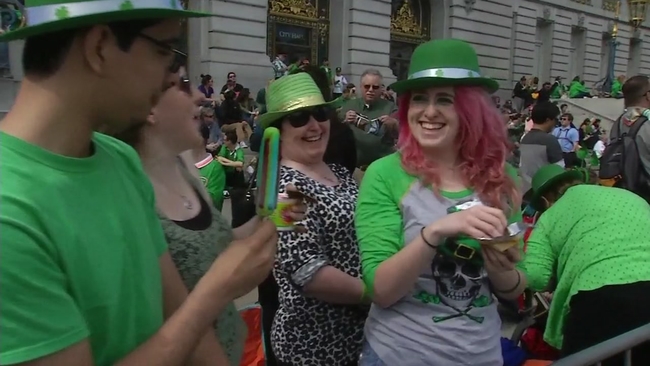 Search suspended for boy swept out to sea in San Mateo Co.