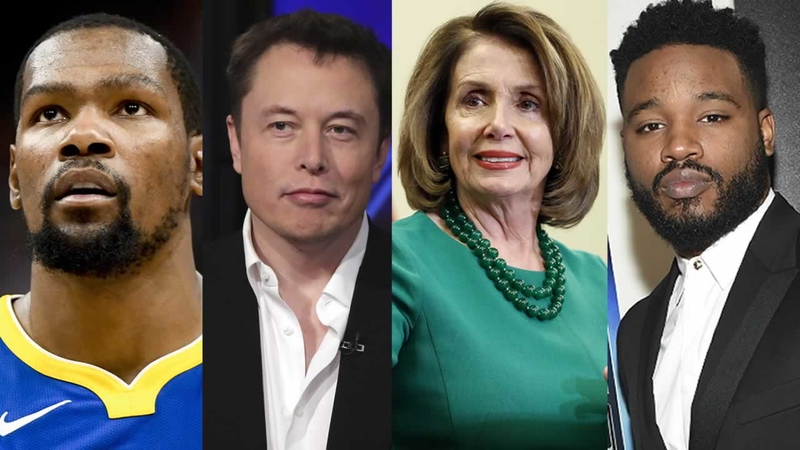 SAN FRANCISCO (KGO) -- Warriors star Kevin Durant is among the top 100 influential people in the world, according to TIME Magazine's annual list released on Thursday.

TIME's list of "100 Most Influential People" of 2018 includes the categories of pioneers, artists, leaders, icons and titans.

House minority leader Nancy Pelosi also gets the honor, cited for her work to advance equity and opportunity for women. "When I ran for leadership, they would say things like, who said she could run. As if I needed anybody's permission," Pelosi said.

Elon Musk, founder of Tesla Motors and SpaceX, is also among the 100. He's honored for building the conditions for colonization on Mars and re-imagining the private space industry.

Coogler is called a person with extraordinary talent, yes. But also one with a spirit of integrity," said a tribute to the director.

Last but not least is Warriors star Kevin Durant. The tribute to KD says he not just "an incredible basketball player; he's an incredible human too." He's committing $10 million to help disadvantaged kids go to college.

Durant responded on Twitter Thursday, saying, "Big honor for me to be on this year's #TIME100 list. Thanks @cue for the kind words!"

He wrote the tribute to KD. In fact, each honoree's tribute is written by someone very interesting in themselves.

Big honor for me to be on this year's #TIME100 list. Thanks @cue for the kind words! https://t.co/OlcoRZMggj