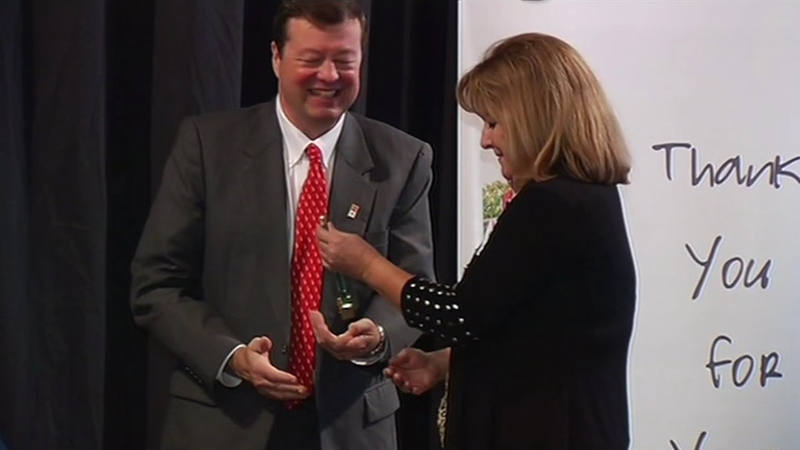 SAN JOSE, Calif. (KGO) -- A celebration was held in the South Bay Thursday by the American Red Cross, to honor heroes who stepped up in a time of crisis to save someone's life.

How do you thank someone who saved a life? It's nearly impossible to show all the gratitude from loved ones. But on Thursday morning, the American Red Cross Silicon Valley Chapter did its best honoring some local heroes at the Tech Museum in San Jose.

"They're the ones that actually take that step," said Red Cross spokesperson Pooja Trivedi. "They're not afraid. They'll be the ones who will just go out and do what's need out in the community and make our community a safer place to be and we need more people like that."

Janell Rubbo is a hero. She was driving her VTA bus to the Diridon Station in downtown San Jose, and found an unconscious woman at the stop. She called 911, started CPR, and didn't stop until paramedics arrived.

Rubbo: "A fireman came up and put his hand in the window and shook my hand and said, 'Janell, we just want you to know you did an outstanding job. We also want you to know that we do have a pulse.'"
Keller: "How did that make you feel?"
Rubbo: "It was overwhelming. I literally started crying."

One of the heroes is high tech. The people behind the AdoptMe app are saving live. But these loved ones have four legs. The social networking tool helps connect families with dogs, cats, and other shelter animals waiting for homes.

"We also go out on Twitter," said Cynthia Typaldos with the AdoptMe app. "Eventually we'll go out on others. But at least four people have come in from the Twitter feed and have said 'hey, I want to know more about that animal.' And they came down and adopted them. And what they say is so wonderful. What they say is, 'I feel I already knew him or her from the posts.'"

This was also a fundraiser for the American Red Cross. They raised $65,000. So they can help the people in the community and become the heroes in the next disaster.
Related topics:
societysan josesocial mediavtared crossmobile appappsocial appsanimal rescueherorescueanimalanimal newstwitterfundraiserapps
Copyright © 2021 KGO-TV. All Rights Reserved.
More Videos
From CNN Newsource affiliates
TOP STORIES